Amnesty International started off in 1961 devoted to simple human rights. Campaigning for democrats imprisoned by dictators. That kind of thing.

Sadly, like many an organisation, they gradually got taken over by people with larger agendas. They are one of the worst examples of left-wing "mission creep". They now have opinions on every topic, and many of their opinions are awful.

They have stupid and offensive leftist politics on issues to do with the frontline Western states - the US, UK and Israel - and they are not trustworthy on those issues. On other parts of the world they are fairly objective. They are willing to criticise communists, Muslims, Arabs and black Africans, for example. (Whereas many on the left won't.)

Ultimately, their good parts are too weak to compensate for their bad parts. They have lost their way, and while I would quote their country reports for many countries, I would not donate to them any more.

Simplistic anti-Israel propaganda from Amnesty International.
At the time of the 2008-09 Gaza War.
Oh Thandie Newton I'm sorry I saw you talk such nonsense!
She says Israel has committed "war crimes and crimes against humanity in Gaza."
Trying to hit Hamas rocket teams is a "crime against humanity"? Talk about debasing the meaning of language.

The reality of the 2008-2009 Gaza war:
Hamas fighter calls for local children to come and help him escape from a building without being fired on from the air.
Their parents are happy for the children to be used in jihad.
The fighter leaves using the children as human shields.
Hamas knows how decent the Israelis are. They use that fact as a weapon of war in order to kill more Jews.

Nothing sums up the sad decline of Amnesty better than the fact that they now claim that Jews building houses are "war crimes". What a pathetic organisation. 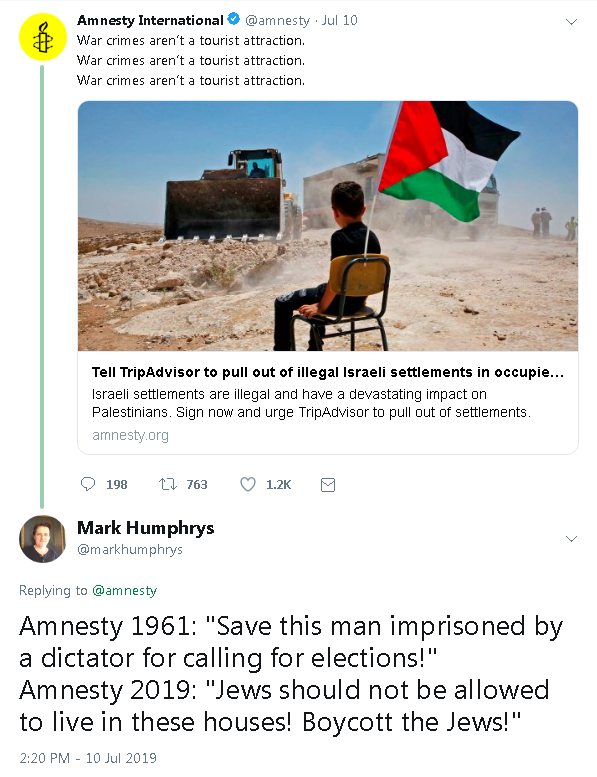 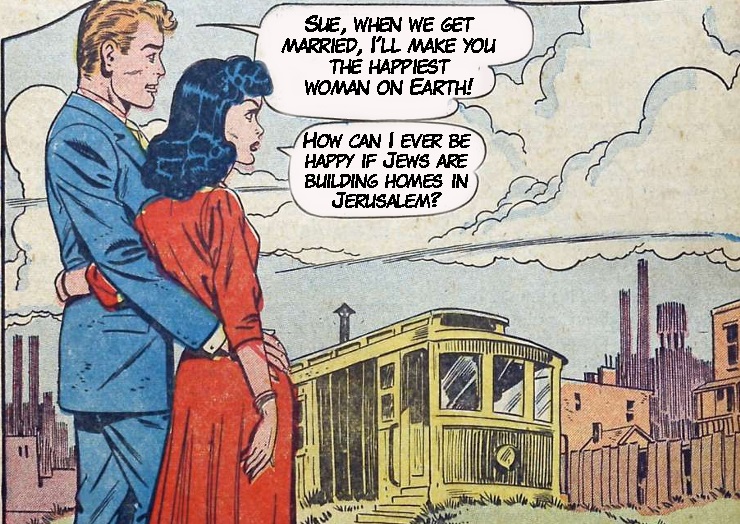 "How can I be happy while Jews are building houses?" - Amnesty International.
Image from here.

Supporting jihadis not prisoners of conscience

At some point Amnesty stopped supporting prisoners of conscience, and turned to defending the rights of violent people with contempt for human rights. 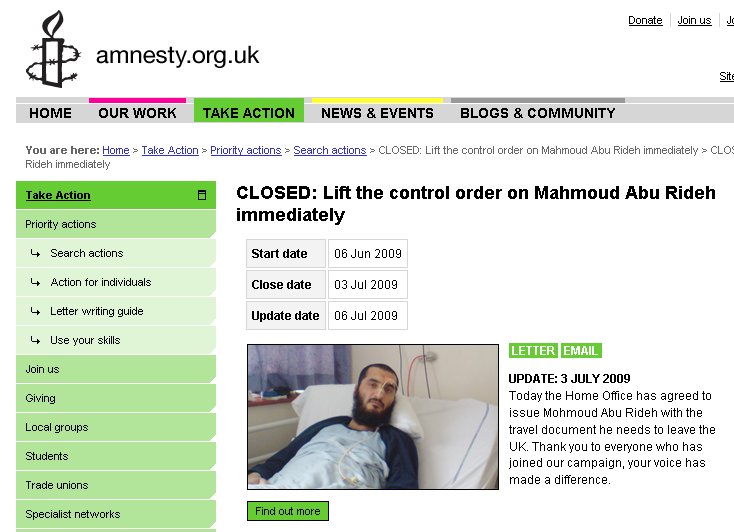 Amnesty's campaign for Mohmoud Abu Rideh (or Mahmud Abu Rideh) illustrates why I no longer support Amnesty.
At some point, Amnesty switched from defending foreign democrats and human rights campaigners to defending all prisoners - including violent people who despise democracy and human rights.
The useful leftie idiots who joined the above campaign got him freed in 2009.
In 2010, oddly enough, he was killed fighting with the Taliban and Al Qaeda in Afghanistan.
Shame on Amnesty for defending jihadis like this and helping them do their evil work. 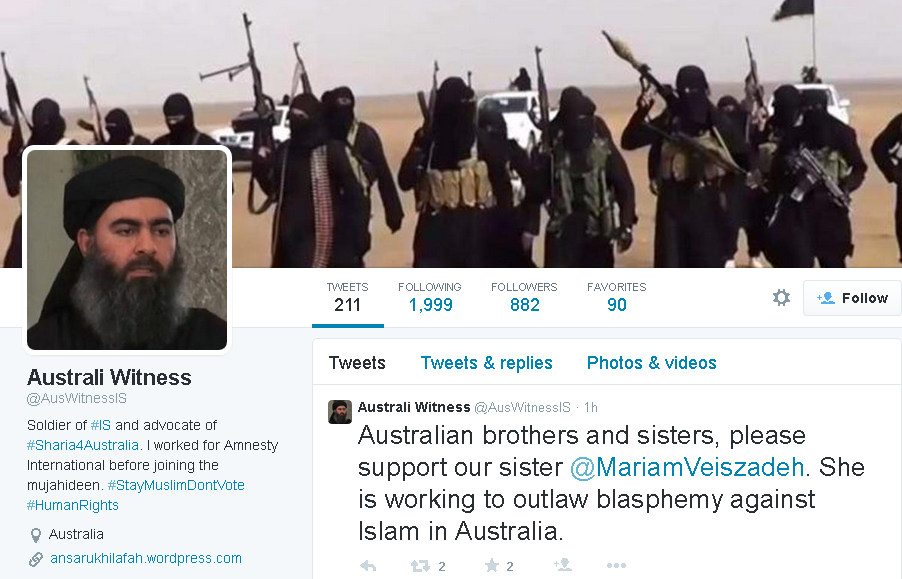 Leading Australian ISIS terrorist account on Twitter says (as at May 2015) that he used to work for Amnesty: "I worked for Amnesty International before joining the mujahideen." Totally believable.

Not only does Amnesty support Islamist prisoners, which is bad enough, but it even employs Islamists. 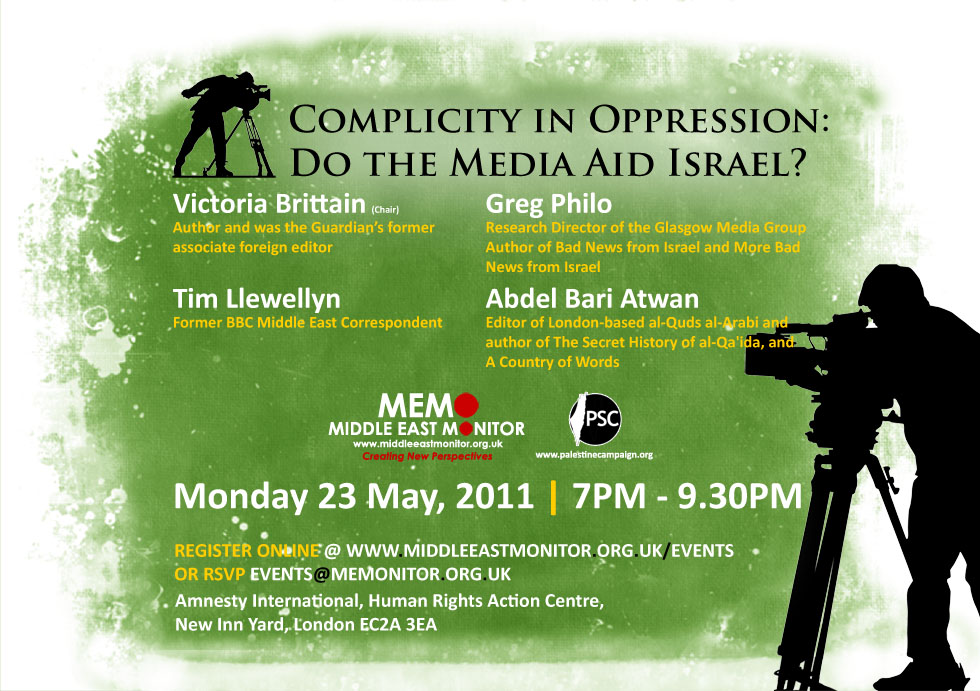 Amnesty hosts an anti-Israel hatefest in London, May 2011.
This featured Islamic terror supporter Abd al-Bari Atwan, who supports nuking the Jews of Israel: "If the Iranian missiles strike Israel, by Allah, I will go to Trafalgar Square and dance with delight."
See also Michael Weiss and Richard Millett on Amnesty's Islamist partner Middle East Monitor (MEMO).
I will never donate to Amnesty again! 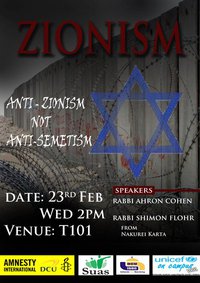 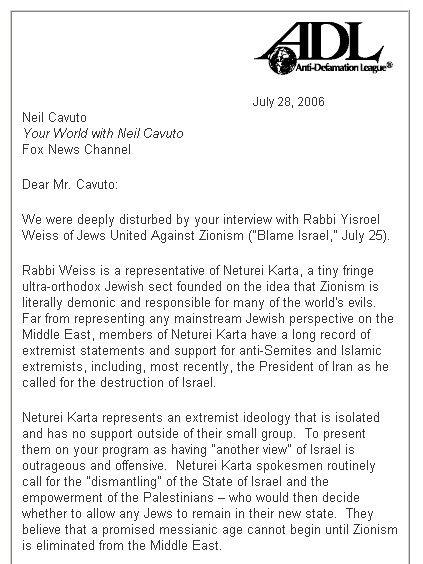 The ADL understand who Neturei Karta are, even if Amnesty don't.
ADL Letter to Fox News Channel. From here. 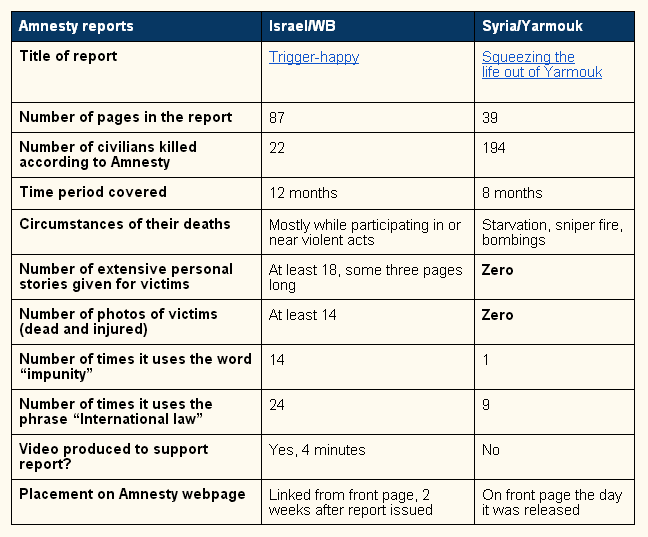 Elder of Ziyon contrasts two Amnesty reports in 2014 - on Israel (counter-jihad operations by a restrained liberal democracy) and Syria (disgusting butcher and dictator slaughters his own citizens). 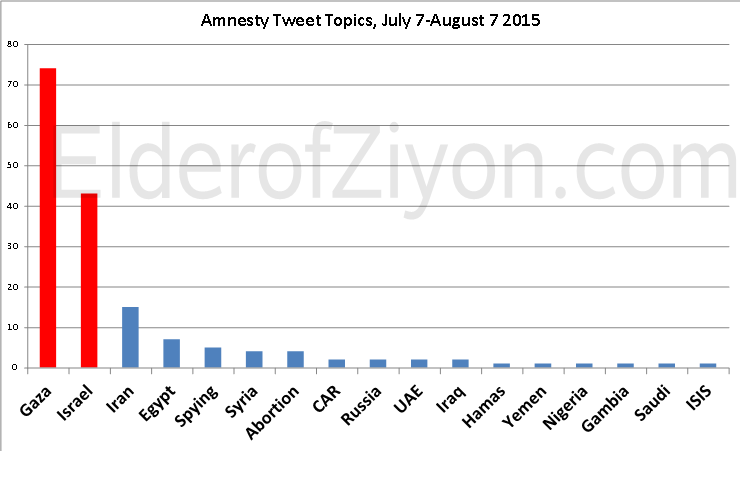 Amnesty's obsession with Israel:
Breakdown of tweets by official Amnesty Twitter account, July-Aug 2015. (No, there was no war on. They just hate Israel.)
From here. 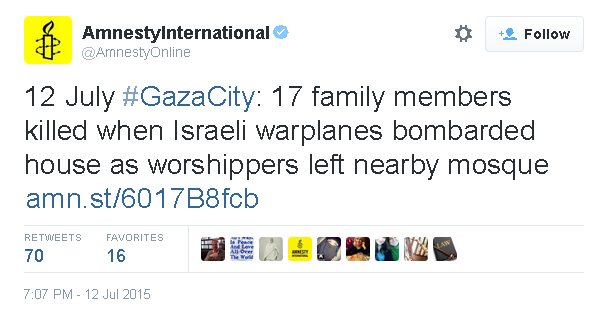 This tweet of 12 July 2015 shows why you can't trust Amnesty.
The house that the IAF attacked was a major Hamas command and control centre with at least six or seven terrorist fighters present.
But Amnesty thinks we don't need to know that. 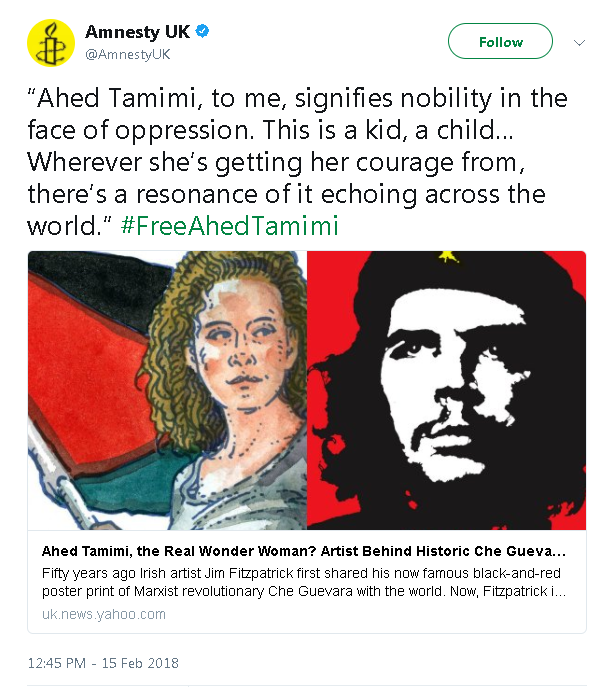 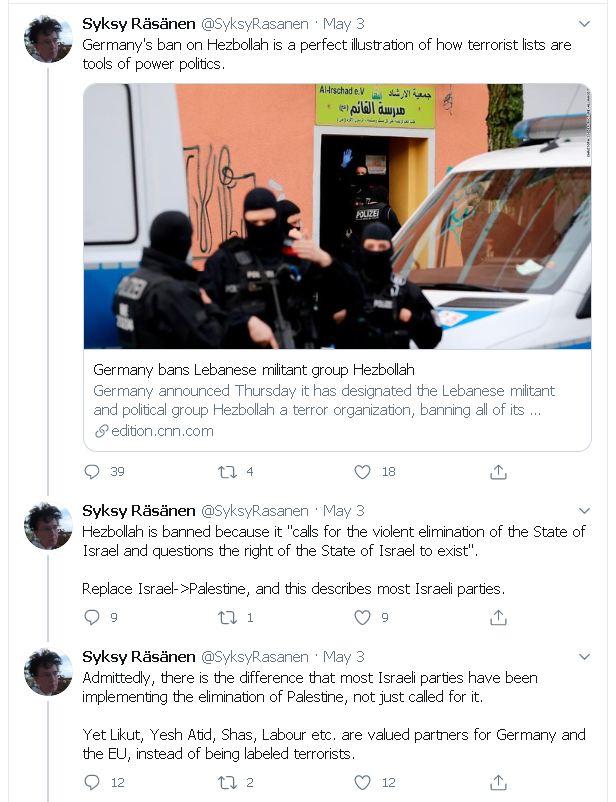 Syksy Rasanen, board member of Amnesty Finland, is angry at Germany banning Hezbollah, May 2020.
This person shows why I no longer donate to Amnesty, and never will again until they get rid of everyone like this.

The "gulag" comment must represent Amnesty's lowest moment ever. 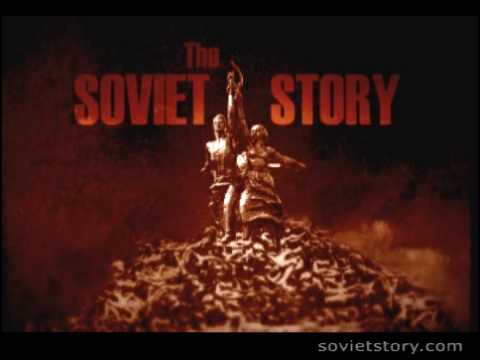 The real gulag: The Soviet Story.

Amnesty used to be about prisoners of conscience. But they now seem to have an opinion on everything.
Amnesty Ireland runs a campaign about the quality of healthcare in Ireland, a rich western country.
Healthcare is already free in Ireland, and accounts for 20 to 25 percent of all state spending. Amnesty are complaining that its quality should be better (and taxes should be higher to pay for that).
You may agree or disagree, but this is a massive divergence from Amnesty's original mission into a general platform of left-leaning ideas that you may or may not support.

When slagging off Amnesty for mission creep, I jokingly suggested it had views on everything, maybe even Brexit. Little did I know I was right. 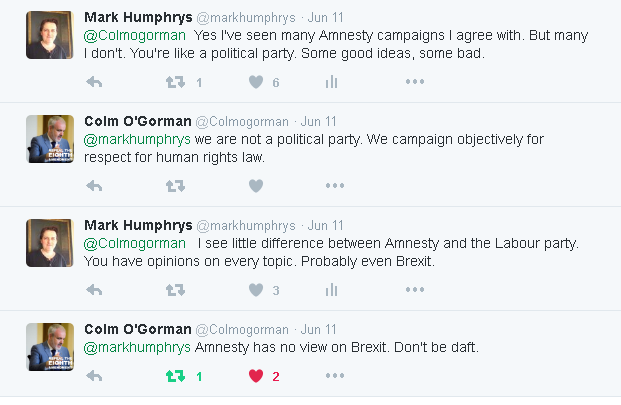 11 June 2016: Head of Amnesty Ireland (who later blocked me) assures me they have no position on Brexit. "Don't be daft." 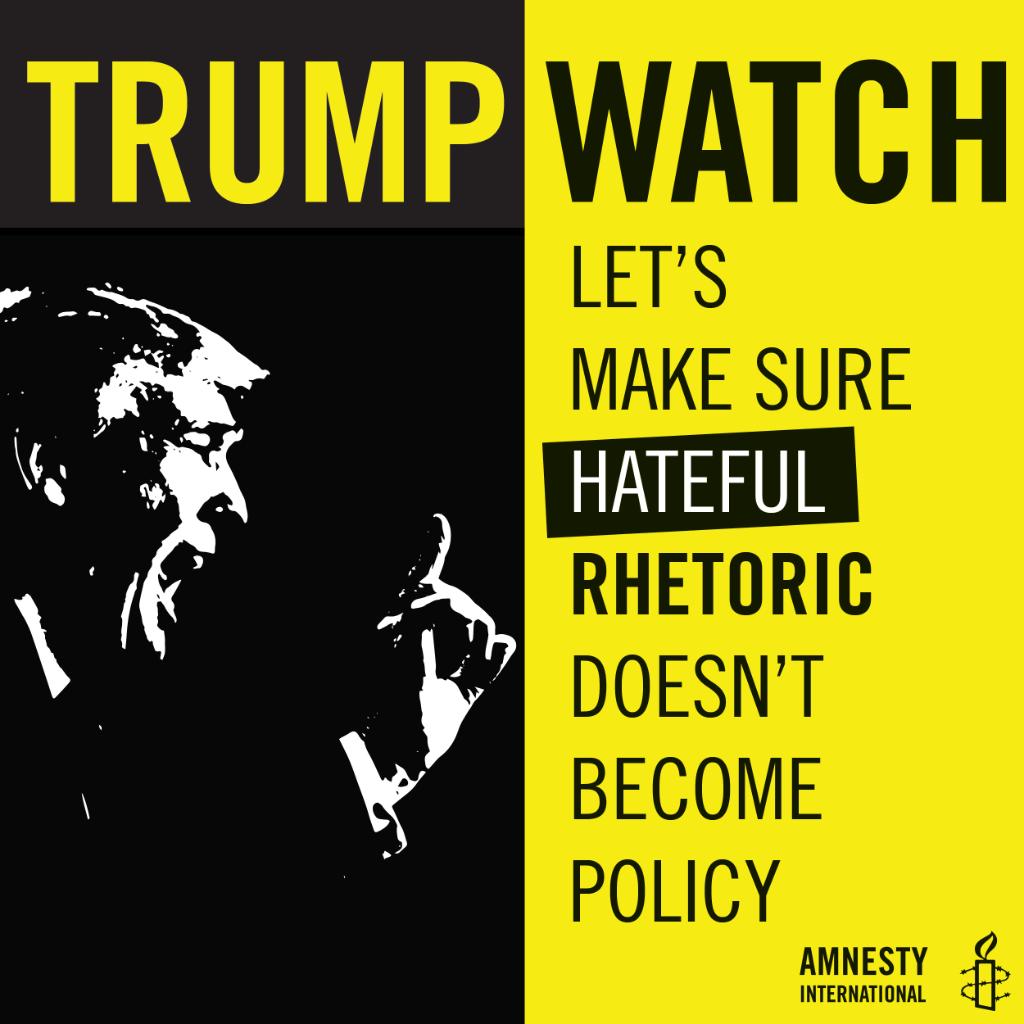 Amnesty, Jan 2017, has views on Donald Trump as well. They have views on everything.
It doesn't matter that I agree with them on Trump. The point is they have out-of-control mission creep.

I am pro-abortion myself, provided that the cut off point is early enough (1st trimester or so). However, Amnesty's decision in 2007 to take a position on this controversial topic is perhaps the biggest example of the mission creep that has totally changed the organisation. 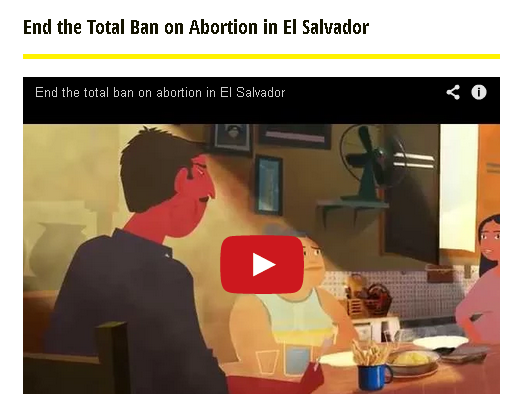 This is on the front page of Amnesty Ireland as at Dec 2014.
If you're anti-abortion, don't join Amnesty International.

Video attacking Amnesty from anti-abortion group Youth Defence.
I don't agree with Youth Defence. A blastocyst is not the same as a 25 week old fetus.
However, this does illustrate how Amnesty are not really a charity any more. They are a controversial political party now, with controversial positions that many people disagree with. 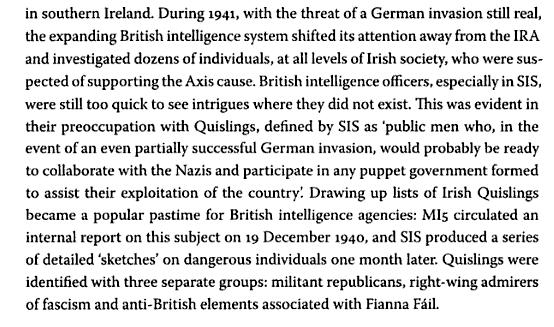 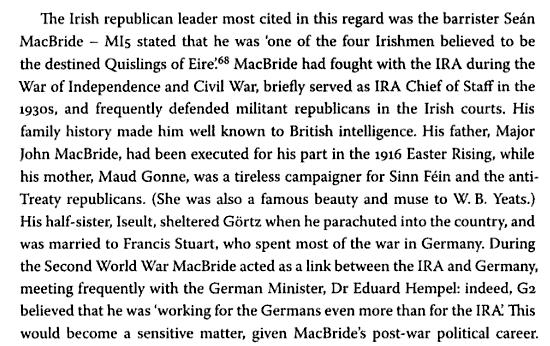 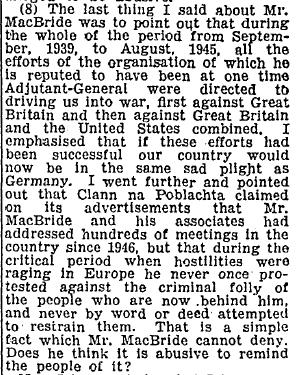 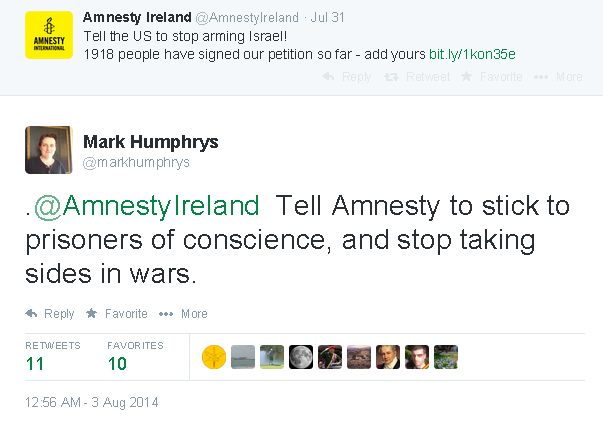 I miss the old Amnesty, the one that was about prisoners of conscience.

Amnesty's choice of him as its public face reveals a lot about its prejudices and blind spots on human rights.

Justin Moran, Communications Co-ordinator at Amnesty Ireland, was formerly (as at 2007) a prominent member of the human rights abusing group Sinn Fein. He was Chairperson of Dublin Sinn Féin.
The above is from Dublin Sinn Fein newsletter, 22 June 2007.
It also shows he was an anti-Israel activist.
His Facebook shows him remaining a strong supporter of Sinn Fein after joining Amnesty.
Amnesty Ireland has no credibility with people like this speaking for it. 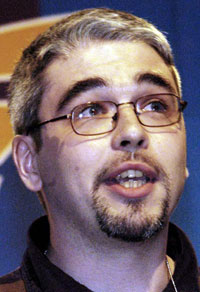 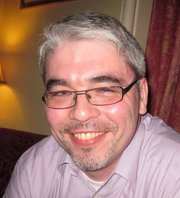 In this piece on China, July 16, 2009, Justin Moran of Amnesty claims to be opposed to the death penalty.
He also claims to be in favour of the right to "a fair and open trial".
Where was the fair and open trial of Paul Quinn when your organisation applied the death penalty to him in 2007?
Or the hundreds of others your organisation killed without trial?
Amnesty Ireland has no credibility with people like this speaking for it.

Justin Moran signs a 2004 petition calling for a boycott of Israel.
The future spokesman for Amnesty International Ireland calls for the ethnic cleansing of the 550,000 Jews in the West Bank and East Jerusalem.
He also wants a boycott of Israel: "The undersigned also urge all citizens of Ireland to support a boycott of all Israeli goods and services". 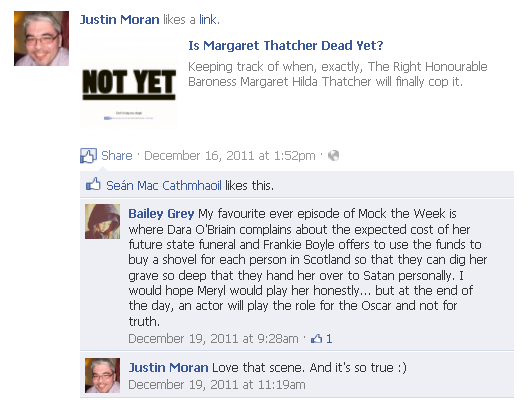 Justin Moran of Amnesty International (Ireland) looks forward to the death of Margaret Thatcher, Dec 2011.
His organisation (SF-IRA) failed to kill her in 1984 when it bombed the Grand Hotel in Brighton. 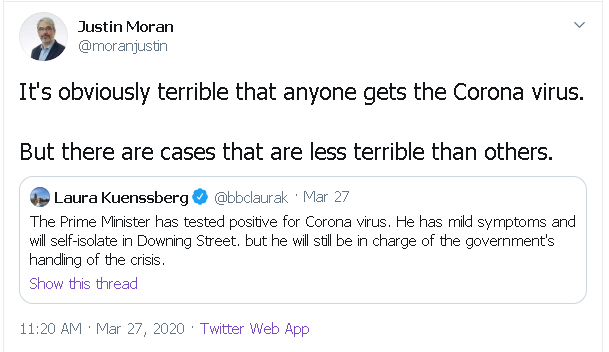 Justin Moran left Amnesty by 2014.
He worked for Age Action and is still on their Board of Directors.
He now works for the Irish Wind Energy Association.
He has not changed. Here he laughs at the British Prime Minister Boris Johnson getting the coronavirus, March 2020.

Colm O'Gorman, executive director of Amnesty Ireland, has taken the organisation in a firm left-wing direction, in line with his politics, but further away from its original mission.

Despite the fact that he is gay himself, Colm O'Gorman is hostile to Israel, the only state in the Middle East where gays are free. Amnesty Ireland has a strong bias against Israel under his watch. He has called for an arms embargo on Israel. He was an obsessed supporter of the Muslim Brotherhood prisoner Ibrahim Halawa. 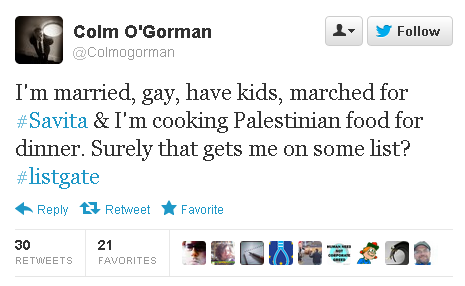 Colm O'Gorman issues a rather self-satisfied tweet on 8 Dec 2012.
He tosses in a dig at Israel.
So should he be on a list? Indeed he should. He should be on my list of gays who won't stand up for the state where gays are free, in its fight for survival with states where gays are oppressed and even liquidated. Being on that list is not something to be proud of.

Colm O'Gorman, 12 Aug 2014, who is gay, defends the Muslim Brotherhood prisoner Ibrahim Halawa as a "prisoner of conscience".

The Muslim Brotherhood's Yusuf Al-Qaradawi replies.
He says about homosexuals: "The schools of thought disagree about the punishment. ... Some say we should throw them from a high place, like God did with the people of Sodom. Some say we should burn them, and so on. There is disagreement." 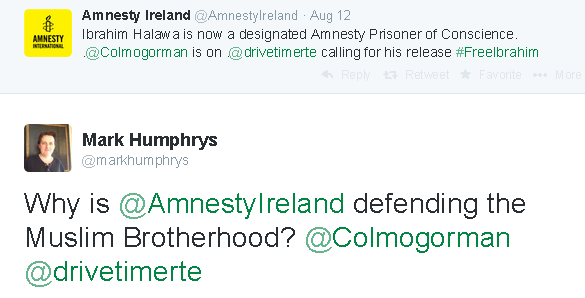 Colm O'Gorman engages with me in this thread, but never engages with my criticism of Amnesty's defence of the MB, Islamists and jihadists.
See more. Amnesty weakly argues that MB people may not be involved in MB violence. 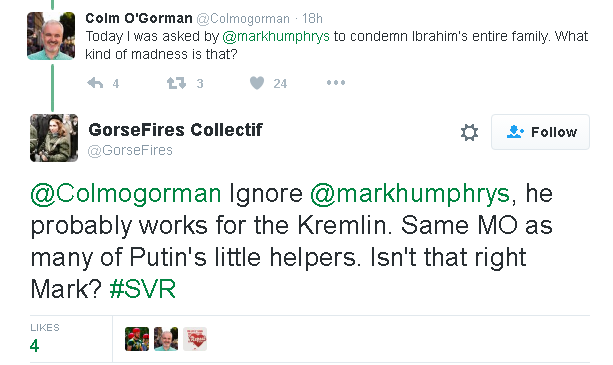 For years, I have sent him the evidence of Halawa links to the MB.
In Jan 2017, he makes it clear that he never reads any of it.
Colm O'Gorman is interested in everyone's opinions in Ireland except the Halawas.

In Nov 2017 I criticised the Halawa family one too many times for this guy's liking.
O'Gorman called Hussein Halawa "more progressive on women’s rights than a Catholic Bishop".
I pointed out that he wants gays executed.
O'Gorman blocked me. 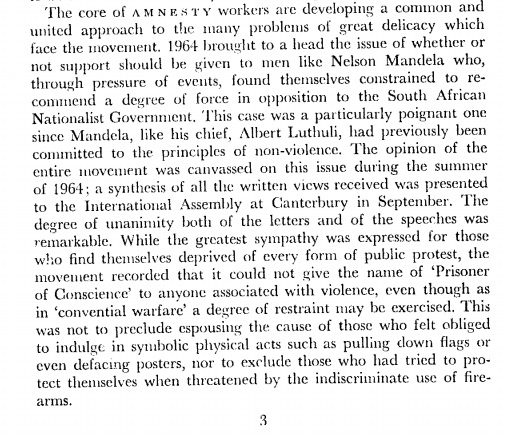 Amnesty used to refuse to defend people linked in any way to violence. Amnesty was a better organisation then.
This is from their 1964-65 report: "the movement recorded that it could not give the name of 'Prisoner of Conscience' to anyone associated with violence". They refused to defend IRA prisoners in the Troubles because they were violent. They refused to support Mandela because he was violent.
"Prisoner of conscience" used to mean something different.

Amnesty Ireland uses a Muslim Brotherhood supporter in their promotional video, Dec 2017.
Ibrahim Halawa could make a huge contribution if he publicly denounced (in English and Arabic) the Muslim Brotherhood, Yusuf al Qaradawi, Salah Soltan, sharia law, and political Islam in general. In the absence of that, this video merely demonstrates a moral void at the heart of Amnesty.