A Palestinian state would not have human rights, because the Palestinians do not believe in such western concepts. The Western left is projecting values onto them that they do not share.

The Palestinians are the most anti-semitic people on earth.
According to ADL Global 100 survey of anti-semitism, 2014. 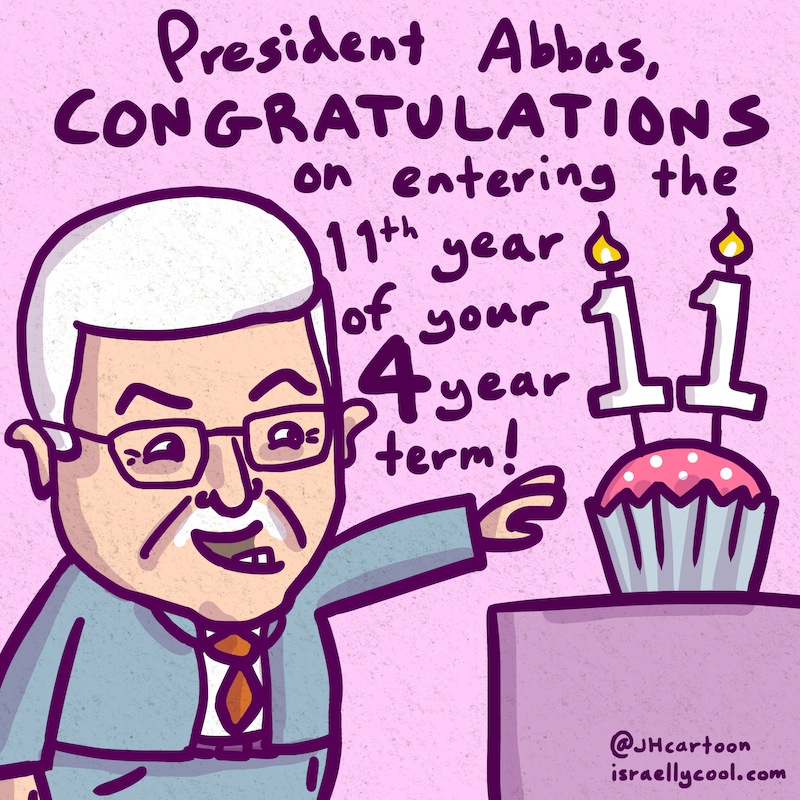 May 2014: Palestinian guy claims they have "elections" because 700 members of the terrorist group the PLO elect the PLO council.
Wow, impressive! I sneer at him.

Religious freedom under the PA

Fatah has Western apologists who claim they are "secular". And yet the facts show that Fatah are Islamic persecutors of non-Muslims.
The persecution of Christians in Gaza and the West Bank.
Report by Chris Mitchell, CBN News.
Describes how the PA (i.e. Fatah terrorist forces) tortured and executed a convert from Islam to Christianity, Ahmad El-Achwal, in the West Bank in 2004. He was a father of eight.
Copy here.

The PA on the West Bank are bad enough. But at least there is an Israeli presence there to moderate them.

In Gaza, unopposed Islamic fundamentalist rule by Hamas has led to an extremist Islamic religious tyranny, with sharia law and the complete crushing of human rights.


Jihadists (probably Hamas) attack U.N. summer camp for children in Gaza, June 2010.
"about two dozen armed and masked men targeted a seaside camp in central Gaza, ... The assailants tied up an unarmed guard, then tried to set fire to two tents and a perimeter fence made from tarp-like material. Wielding knives, they slashed a plastic swimming pool, blow-up slide and toys."
Aren't they the big brave men?

Gaza water park shut down by Hamas, then burned down by Hamas, Sept 2010.
See report. Hamas had issued warnings to it because of "events where men and women sit together".

When presented with evidence of sharia in Gaza, left-wing Israel-haters often resort to some sad argument like the above.
Here in May 2014, a female "Nontheist for human rights and social justice, naturalist, skeptic" defends the oppression of women by religion.

As soon as you criticise Hamas for enforcing "modest dress" and banning bikinis, left-wing "liberals" will leap to its defence and say Muslim women should not have to wear bikinis! They muddy the waters and pretend that people who merely want freedom want to enforce immodest dress. It is creepy and dishonest and certainly illiberal.
I summarise my view, 30 May 2014. I support freedom, not culture. That is why I am not a leftie. 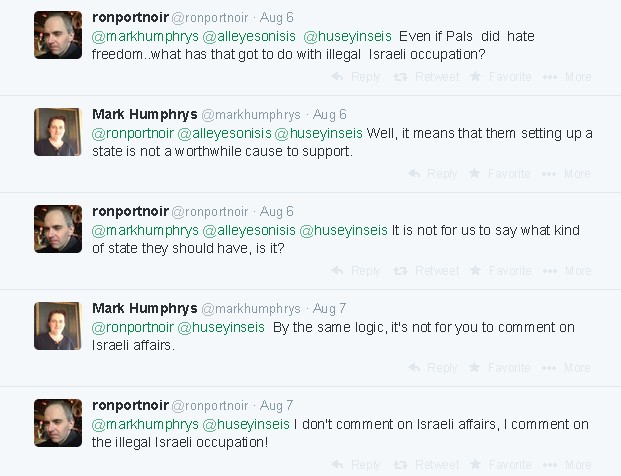 Irish-American Obama-worshipper Mary Ramirez defends sharia by saying it is wrong for us to "judge" their culture.
I reply that she is judging the Israelis.

Palestinian gays meet in Israel, not in PA

A sad, sad article, Aug 2013.
A piece about the few pro-gay activists in Palestinian society ends with the news that there will be a "Palestinian Queer Party" event ... to be held in Israel!
The Palestinian gays have to hold their parties in Tel Aviv in Israel for safety. Says it all.

Al-Qaws, the Palestinian gay group, has its offices in: (1) Hasoreg St, in West Jerusalem (Israeli rule), and: (2) Haifa, in Israel.
No office at all under PA or Hamas rule. Funny that!

Name any "out" gay in Gaza or the PA

My standard challenge to lefty defenders of the Palestinians is: "Show me any atheist or gay living openly under PA or Hamas rule". 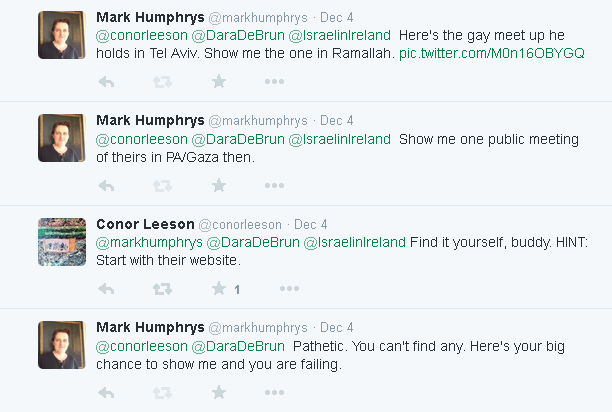 Conor Leeson, Dec 2014, unwisely takes up my challenge, and fails. He ends up saying: "Find it yourself, buddy." Pathetic.

"Irish in Gaza", Jan 2015, unwisely attempts to answer my challenge to name any "out" gays in Gaza.
They claim to know many gays in Gaza. That's possible, but hardly the point. When asked for the name of a single "out" gay in Gaza, they can only name friends who are in the closet. Very telling.
None of their pals in that thread can name any either. They all act as if they never thought about this issue before.

Against a Palestinian state

The idea that a "Palestinian state" will solve anything is ludicrous. No one should want to see such a state created.

A Palestinian state on the West Bank would merely start a new and more violent phase of the war.
From here. 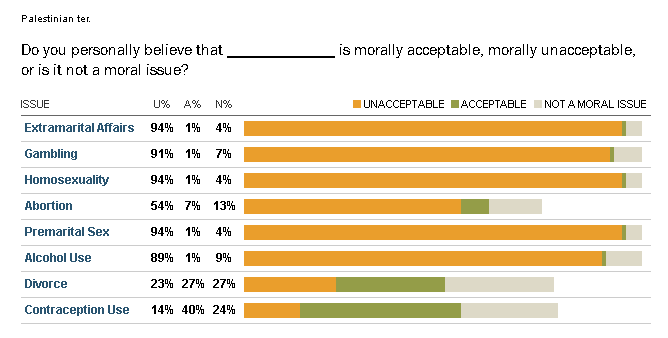 Palestinians massively oppose homosexuality, alcohol and premarital sex.
But because they are brown, the western left likes them. If they were white, the western left would have contempt for them.
From Pew survey, Global Views on Morality 2013.
See Palestinians' other reactionary views about morality. 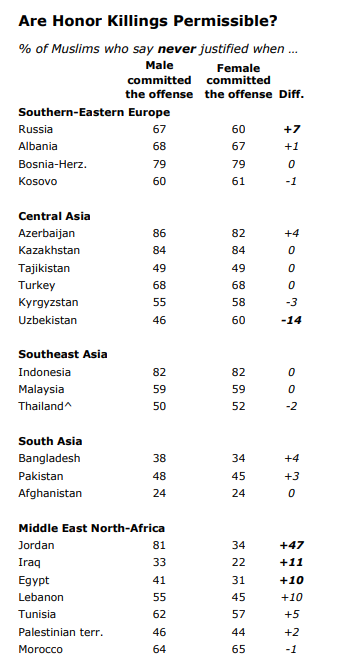 The majority of Palestinian Muslims support "honour killings".
Nice heroes you've got there, leftists.
From here. See Palestinians' other bigoted views about women.