There will never be peace in the Middle East until the Palestinians change, and adopt the values of human rights, religious freedom and liberal democracy.

In the absence of that, Israel addressing their supposed grievances (ending the "occupation", allowing a "right to return") will lead to more violence, not less (as the "Peace Process Intifada" has shown). The only thing that will bring long-term peace is the gradual adoption of democracy and human rights by the Palestinians. 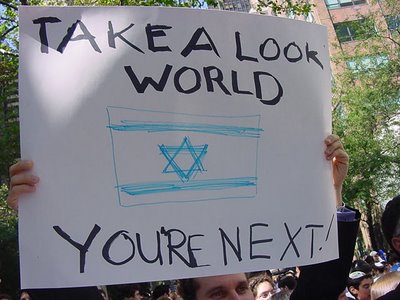 From pro-Israel demo, June 2007.
Israel is the front-line state of the West, facing the enemy before we have to.
In the 2000s, we discovered to our surprise that the disgusting suicide bombings we saw in Israel in the 1990s were not just Israel's problem. They were a glimpse of our future, in the rest of the West. They show what the future will be like, in Madrid, London and all western cities, which will have to live now for the next few decades under the constant threat of jihadi suicide bombing.
Israel's fight is our fight - the fight to preserve democracy, freedom of religion, free speech and human rights against our totalitarian enemies.

The tragedy of the "peace process".
No one imagines that things could get worse.
Just like revolutions should make a country better, not worse, so a "peace process" should lead to less violence, not more.

Arafat shows that the "peace process" was always a fraud. The Israelis were sincere. He was not.
Here on PATV in 1995, he compares the Oslo Accords to the Treaty of Hudaybiya, that Muhammad signed with the intention of breaking it later, after his army had become stronger and he was able to win a war.
Westerners weren't listening. And still aren't listening.
Note also the "secular" Arafat talking like a religious maniac here: "How can we accept such humiliation of our religion, Oh, Messenger of Allah?"

How Arafat destroyed Palestinian prosperity:
The GDP per capita of the West Bank and Gaza over the last few decades.
Stats from Angus Maddison. 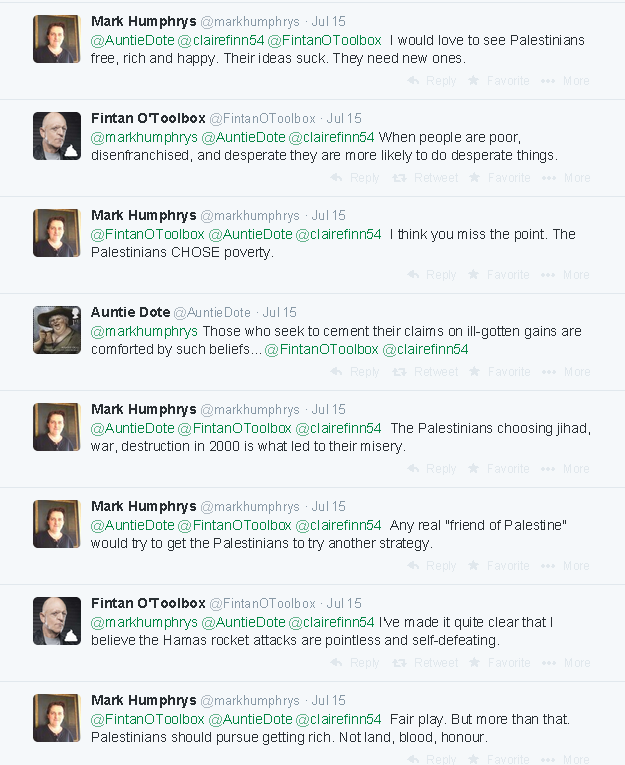 So Palestinians should just "get over it" and move on?
Yes, exactly, I reply.
At least, if they want to be happy.
If they want to wallow in misery, they should carry on what they are doing.

The left are the enemies of the Palestinians because they encourage them to keep fighting instead of starting a better life.
As I say to some other lefties in July 2014: "Both of you want Gazans to wallow in misery and vengeance rather than build a better life. Not progressive!" 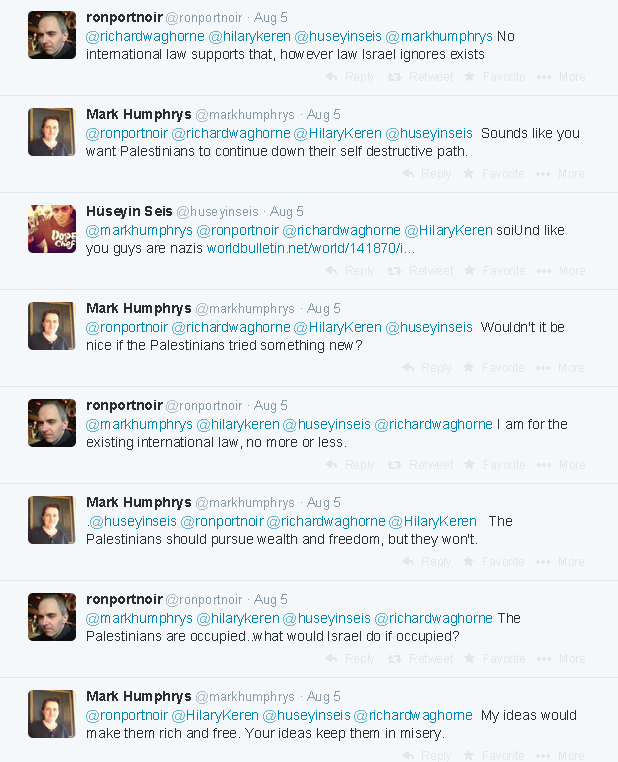 I argue that the left for 50 years has encouraged Palestinians to ruin their lives. 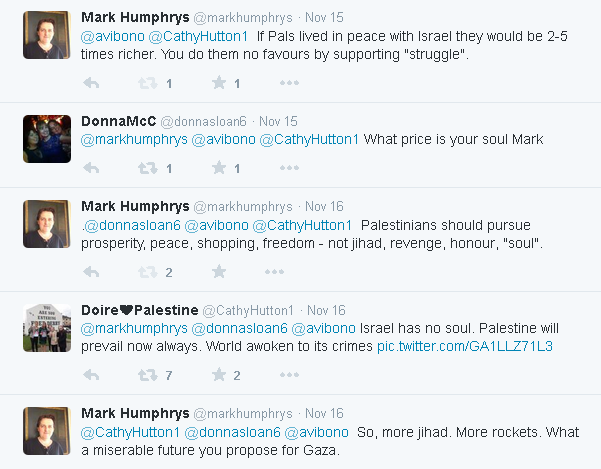 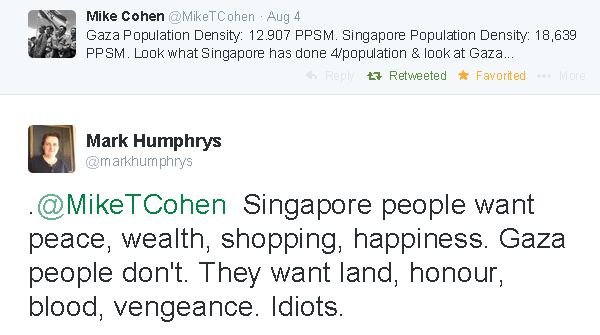 We can argue about the details, but broadly speaking Singapore is rich and peaceful because it wants to be.
Gaza and many other places in the world don't want to be rich and peaceful. They want other things.

The intifada is over, and Israel has won

The intifada is over, and the left was wrong. All through 2000, 2001, 2002 and 2003, as the Palestinian intifada raged against Jewish civilians, we heard again and again from the western left that Israel's response was all wrong. That a tough Israeli response would just encourage more hatred and violence, and breed more terrorists. That Sharon was a disaster.

But the left was wrong. Israel's response - military incursions, building the wall, and targeted assassination - ended the violence. Israel elected Sharon to stop the Palestinian violence - and he did. The western left was wrong about everything.

The threat to Israel is now - as it always has been since 1947 - that of a Second Holocaust, the extermination of the 6 million Jews of Israel.

Israel's national priority is now, and always will be - until the Islamic world changes - to guard against this nightmare.

Is there any more optimistic note I could end on? Not really. It is the Palestinians that must change if there is ever to be peace.

The Palestinians must abandon Islamism, jihad, sharia, tribalism, autocracy and anti-semitism and adopt the values of liberal democracy, freedom of speech, freedom of religion and human rights. If they ever do so, with Israel next door, there will be peace and prosperity beyond their dreams.

In general, there will be no peace in the Middle East until the entire Islamic mind changes, and embraces the Enlightenment and the modern world. This will take many decades, maybe a century, but it could eventually happen.

In the meantime, while we wait for the Palestinians to change, it seems that a security solution is the only way forward for Israel.

"European spectators must understand the real force that drives [the Israel-Palestine conflict]. It is not "Palestinian land" as such. Otherwise Israel’s past concessions of land, such as — at Oslo — leaving 96% of West Bank Arab Palestinians to govern themselves or evacuating Gaza in 2005, would have been taken as goodwill gestures, stimuli to further negotiation and peace-making. Instead, they were taken as signs of weakness, cause for more violence. The real engine of conflict is the Islamic imperative laying down that any land once ruled by Islam — as historic Palestine was ruled by the Turkish caliphate — must be returned to Islam, though it take 1,000 years. Only this can explain uncompromising calls for Israel’s elimination."
- The only time (the only time!) I can recall seeing the cause of the Israel-Palestine conflict laid out in an Irish newspaper.
I cannot recall any Irish journalist ever doing this.
It took the Israeli ambassador, 12 Dec 2012, to explain this to Ireland.

"War with Israel is not subject to a treaty, cease fire, Sykes-Picot Treaty agreements, patriotism or disputed borders, but it is jihad for the Cause of Allah until the entire religion is for Him only. Jihad seeks the liberation of Palestine, the entire country of Palestine and to liberate every land that used to be a territory of Islam, from Spain to Iraq."
- Al Qaeda also explained it in 2006, but the Irish left didn't listen.

A Muslim in Kosovo sums up the entire problem with Palestinian and Iraqi Muslims - that in both countries majorities or large minorities preferred tribe, religion, hatred, honour, pride, revenge and glory to the less glamorous job of making their countries prosperous and successful:
"Kosovo is a success because we wanted a change. We are not like Iraqis or Palestinians who don't want change and seem to enjoy living in poverty. Here everyone is thinking about progress and the future."