This did not stop the hatred and fury, which is well captured on Twitter. People below felt free to express in public that they wanted Palin dead, raped, or both. One even wants her children dead.

I am not really a Palin fan. She's all right, and I would prefer her to that idiot Obama, absolutely. But she's hardly my dream President. My dream President would be Victor Davis Hanson.

But this is not about Palin. This is about a blood libel, and the crawthumping hypocrisy of the left.

Twitter users wish death on Sarah Palin after the Tucson shooting, Jan 2011.
Of course there is no evidence that the shooter was interested in Sarah Palin.
And Sarah Palin - unlike these scum - has never called for political violence.

Lauren Bendik issued the above public comment about Sarah Palin.
She was upset that it was included in the above video.
So she got YouTube to take the video down on grounds of "privacy"!
Disgusting.

Adam Fine does not apologise. Instead he complains about the video: "It really is funny yet pathetic that someone went through all the trouble to gather so many posts about wishing for palin's death".
That's not what's funny and pathetic here, Adam.

Tweet complains that Palin never gets any death threats.

I was interested in whether the above compilation was repeatable. It is.

You can search Twitter at any time and you will find fresh death threats.

Here's a new search, turning up a variety of people who advocate violence, death and rape against Sarah Palin. Why? Who knows. None of them seem to use logic. But I agree with this comment that: "These tweets prove there's no shortage of 'Jared Loughners' out there." 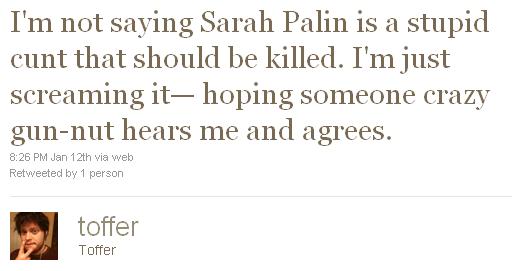 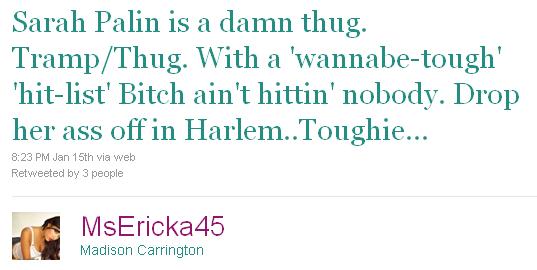 As Twitter shows, Sarah Palin has received a lot of death threats and rape threats. The most disturbing stalkers may be the Christy family.

Incredibly, when Shawn Christy of Pennsylvania started threatening to rape and kill Sarah Palin, his parents supported him, and his father Craig Christy also started making death threats. Both were arrested by the FBI in Aug 2011. 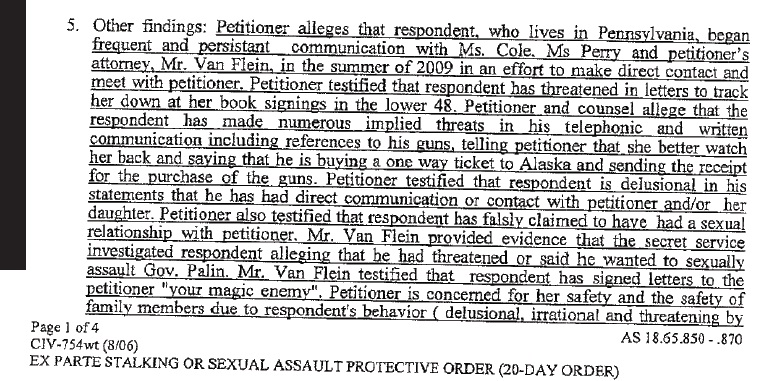 Palin was granted a protective order

(and here) against stalker Shawn Christy of Pennsylvania in 2010.
In 2011 she also got a restraining order against his father Craig Christy.

Shawn Christy and his father Craig Christy were both arrested by the FBI in Aug 2011 and will be sent to Alaska to face charges of stalking and making threats.
The above is a message alleged to have been sent to Palin's lawyer by Shawn Christy.
Extract from the FBI arrest affidavit.

The FBI arrest affidavit also claims that the father Craig Christy made threats. 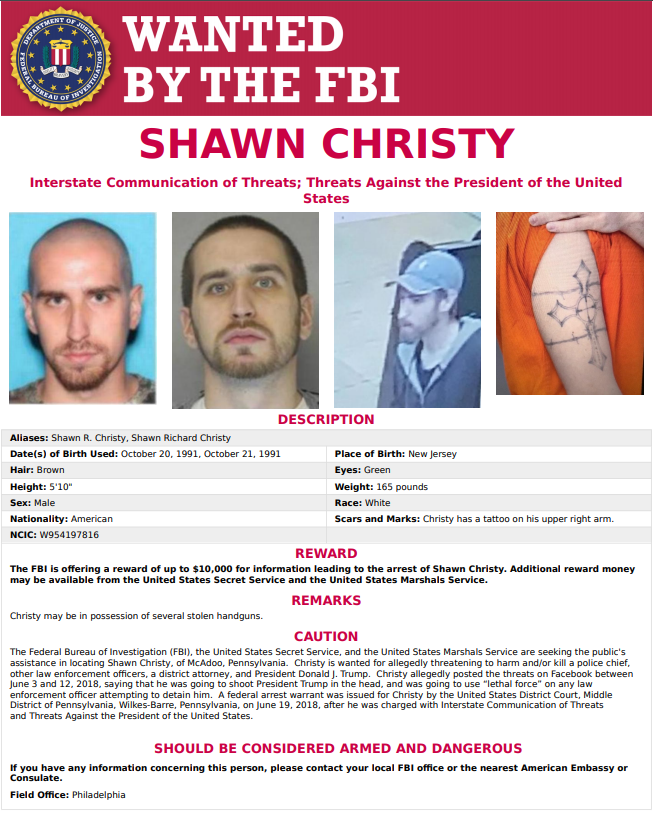 In June 2018, Shawn Christy went on the run after making threats against President Trump.

An unending stream of death threats

Actor Orlando Jones thinks it is funny to crack this joke about killing Sarah Palin.
Would a white man joking about killing a black woman be equally funny?
He is unapologetic.

Return to The Tucson shooting.