The Halawa case - After

The Halawa case (after)

In 2013, four of the adult children of Ireland's leading Muslim Brotherhood cleric, Hussein Halawa of the Clonskeagh mosque, were arrested in Egypt in the massive Muslim Brotherhood demos. The three daughters were released later in 2013. The son, Ibrahim Halawa, was released in 2017.

Ibrahim Halawa as a public figure, 2017 on 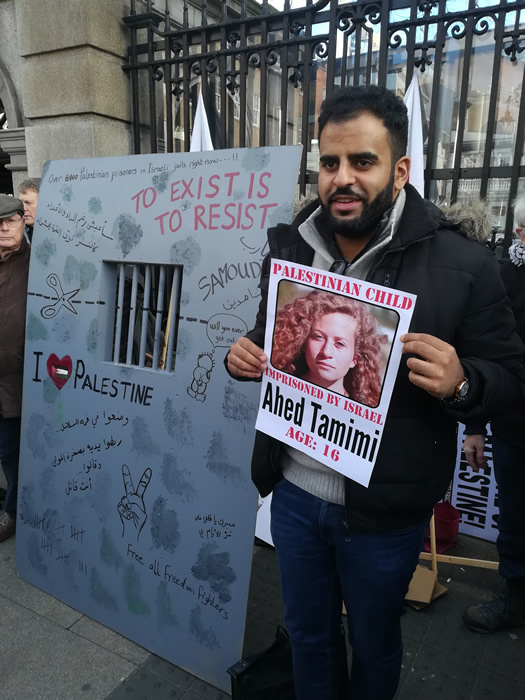 Ibrahim Halawa at an anti-Israel protest in Dublin, Jan 2018. Also here.
He is protesting in favour of young Palestinian radical Ahed Tamimi (from a family of radicals).
Ahed Tamimi supports stabbings and suicide bombings (also here).
Notice the sinister slogans on the placard, describing Islamic terrorists as "freedom fighters", and supporting "resistance" in the context of a brutally violent Islamic terror campaign. 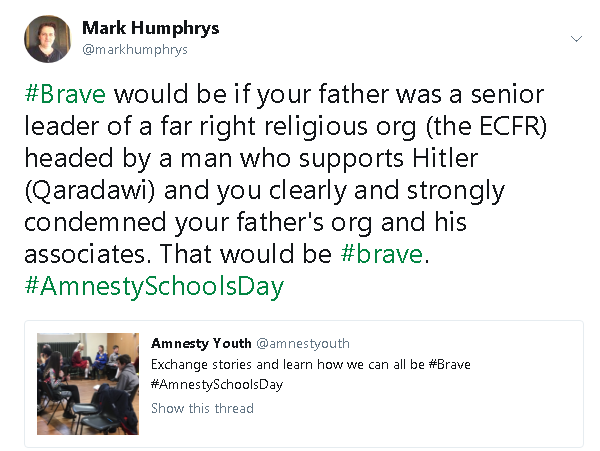 Ibrahim on 13 May 2018 posts about a woman whose son has spent 26 years in Israeli prisons "for no reason".
Her name is Mazyounah Abu Srour.
Her son is Nasser Abu Srour, arrested in 1993 after he killed an Israeli Shin Bet security agent.
So much for "no reason". 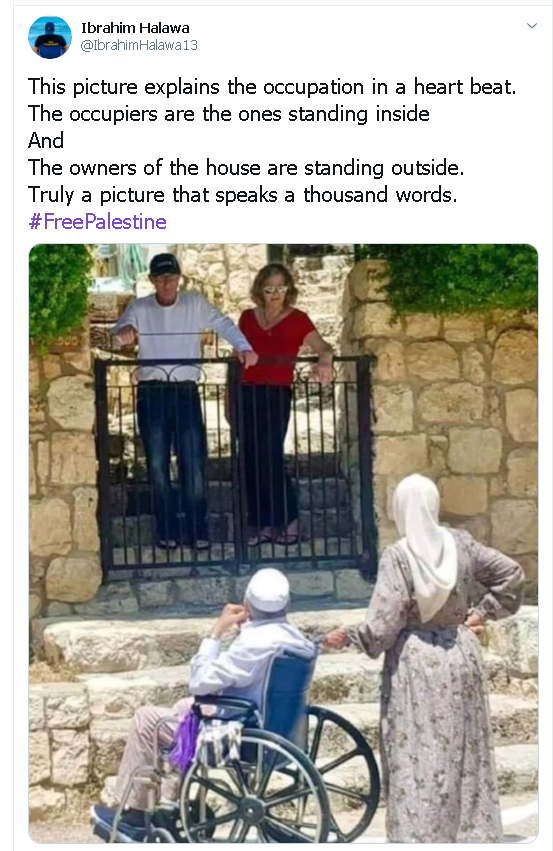 Ibrahim tweets about "the occupation" in May 2020.
But this is not in the West Bank or Gaza.
This is from an Al Jazeera story in 2020 (see text) where an Arab former resident of Ijzim in Israel returns to see his old family home, now the home of some Israelis.
Ijzim is south of Haifa, inside the 1967 borders.
The man Ibrahim calls the "owner" of the house has not lived in it since 1948.
So is all of Israel an "occupation" now? 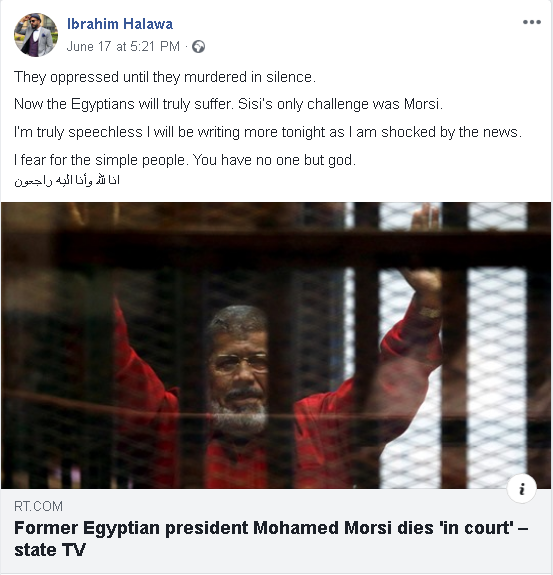 Post on 17 June 2019 after the death of the former Muslim Brotherhood President of Egypt, Mohamed Morsi.
From here. 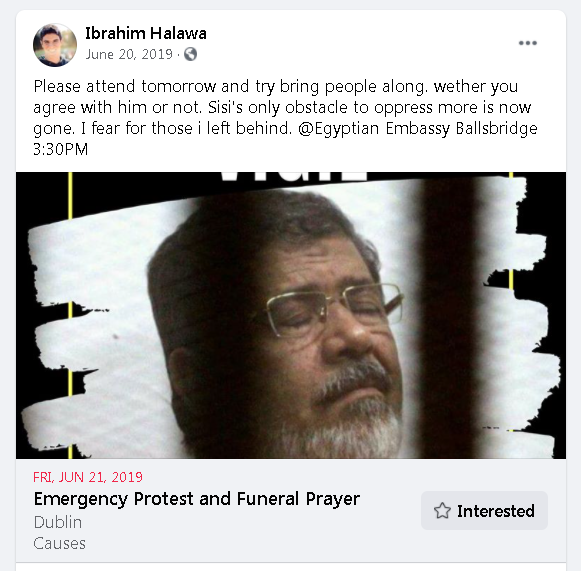 Ibrahim promotes a protest after the death of Mohamed Morsi.
From 20 June 2019.

Ibrahim Halawa lies about me, Nov 2021

I have discussed the Halawa case on my site and in the media since 2013. At no point did Ibrahim Halawa or any of his family ever explain a fact I got wrong. They avoided talking about me, since my facts were correct.

In Nov 2021, bizarrely, Ibrahim Halawa suddenly talked about me. And what he said was lies and defamation. 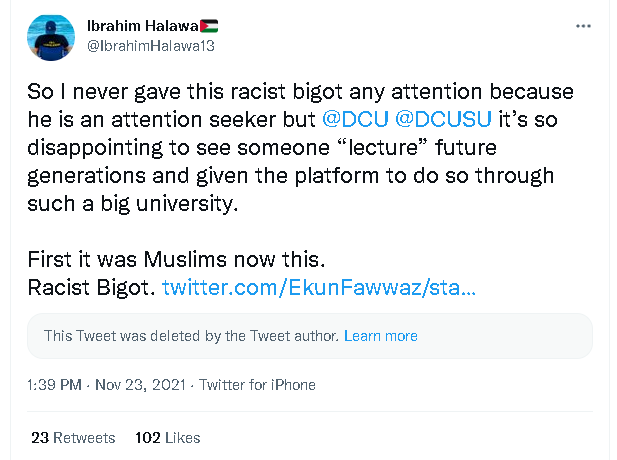 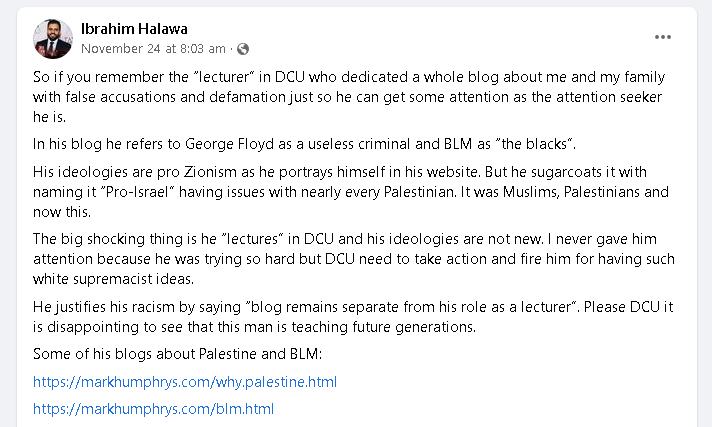 Ibrahim Halawa lies about me on Facebook, 24 Nov 2021.
He is complaining about my page on Black Lives Matter. The only problem is that what he says about it is a lie.

Ibrahim may not have known about their racism, but he does now, if he is reading this. It would be great if he would renounce these racists, and their racist organisation, the Muslim Brotherhood. Your turn, Ibrahim. 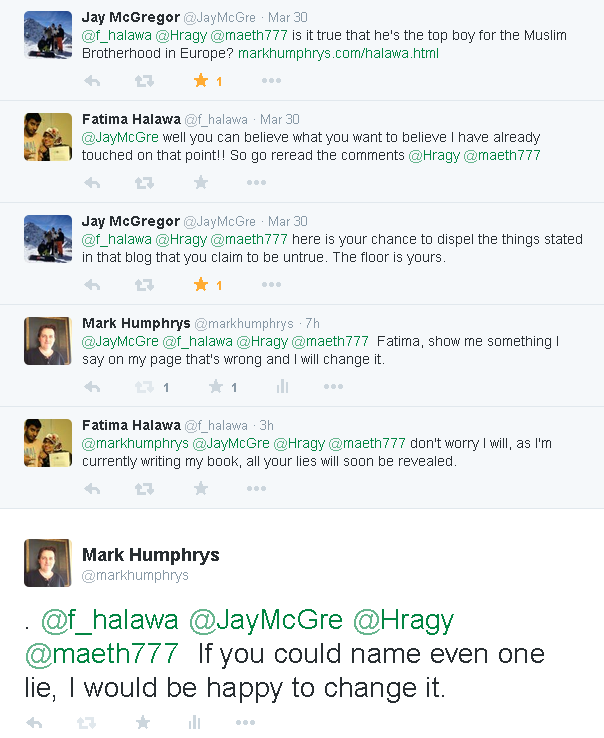 Ibrahim Halawa acts as intermediary for hate preacher, May 2022

Not content with speaking at the rally of a racist organisation, citing two racists as his leaders, lying about me with made-up fake quotes, and declaring himself an authority on who is "racist", Ibrahim Halawa emerged again in May 2022, this time as an intermediary for a racist hate preacher. 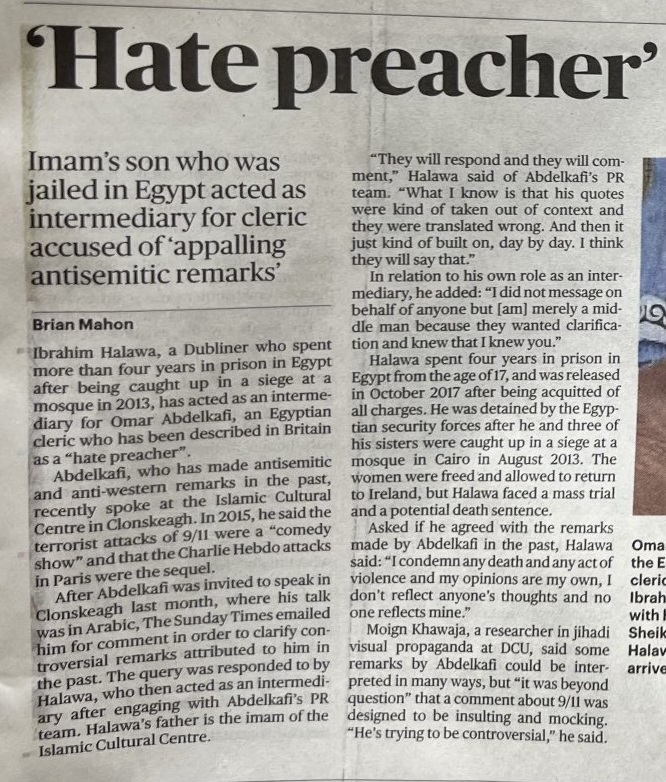 Cracking reply.
Reminding us of all the jokes and memes after his Late Late Show appearance.
From here.

For a man with no connection to the Muslim Brotherhood, Ibrahim Halawa continues for some reason to be interested in it. 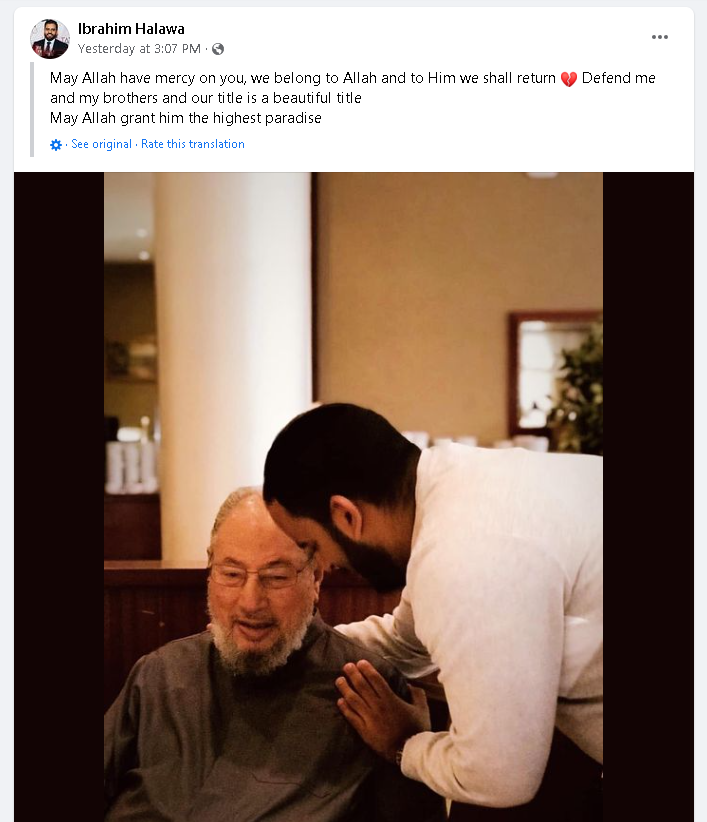 Ibrahim Halawa posts a tribute to Yusuf Al-Qaradawi, spiritual head of the Muslim Brotherhood, on his death in Sept 2022.
From here.
He also retweeted an official tribute on Twitter.

Yusuf Al-Qaradawi praises Hitler and the Holocaust, Jan 2009.
Noted expert on "racism" Ibrahim Halawa posted a tribute to this man on his death. 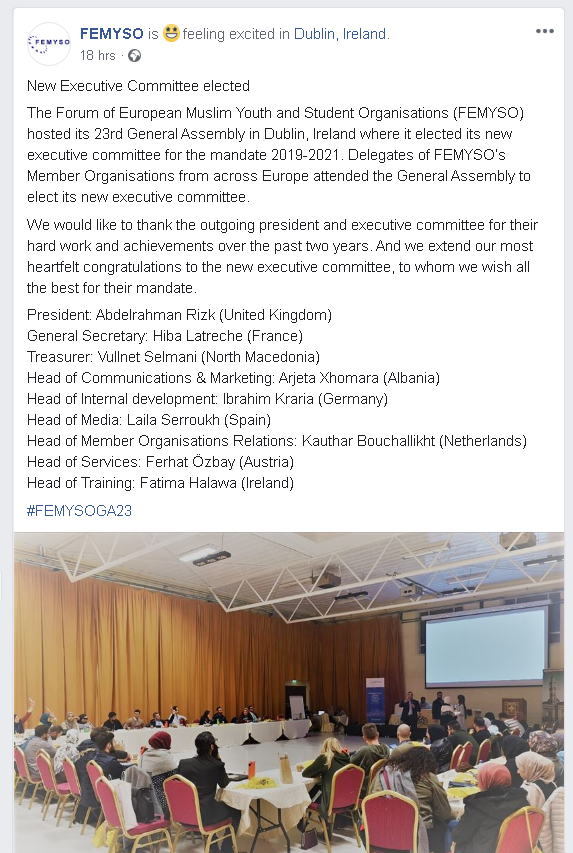