Four years of my research on the Halawa case was vindicated on November 3rd.

Everyone who thought Ryan Tubridy was a lightweight needs to think again. His interview on the Late Late Show on November 3rd with Ibrahim Halawa, released after four years in jail in Egypt, was an example of real journalism.

In true Late Late tradition, he got Halawa comfortable and relaxed, chatting about how he planned to be in Ibiza in 2013 but instead ended up in Egypt, and how he planned to go to the cinema in Egypt and was not interested in politics. Then, like an executioner, Tubridy played a clip of Ibrahim speaking fervently in Arabic on stage in Cairo at a massive political protest of 10,000 Muslim Brotherhood supporters.

The contrast between "going to the cinema" and "speaking on stage to 10,000 Islamists" was too much for social media, which exploded with jokes and memes about the same thing happening to them.

So where did this video come from, and why do I say I am vindicated?

Well, it came from my research. For four years, in the face of an endless flood of abuse and libel, I have researched and criticised the Halawa narrative. I worked hard to source original material from multiple countries. I was tipped off to the video by an Egyptian contact. It was posted online by Ibrahim's sister. She deleted it, but I had saved it. I then got my Egyptian contact to translate the Arabic for me. The video and translation have been on my site for four years, while Halawa supporters hurled abuse at me, saying that both video and translation are fake. (The Halawas themselves have not been abusive. It is their defenders.)

This all ended on November 3rd. When presented with the video, Ibrahim did not say: "That is not me on stage." He did not say: "The Arabic translation is fake." After four years, this was his big chance, and he did not dispute the video at all. Nor did he dispute the other video (of him in the mosque with MB diehards) which also comes from my site. My site indeed has an entire dossier of carefully-sourced evidence that Ibrahim and his father (a senior MB figure) and some of his sisters are all supporters of radical Islamists, mainly those connected to the Muslim Brotherhood. I get lots of abuse for collecting this information, but November 3rd suggests it is all true.

The Sunday Times is also vindicated today. It was the only media outlet with the bravery to publish my research - back in January 2016. My article then stuck to the facts of what I could prove. It is noteworthy that there was no response at all from the Halawa family or campaign. They did not even write a letter to the editor.

I stick to the facts. I do not trade in speculation, as many do on both sides. And for four years, I wondered if Ibrahim would dispute those two videos that are on my site. It is a vindication of my work that he confirmed the two videos are real.

I now challenge Ibrahim to a civilized public debate, where we can thrash out all the issues to do with the case, such as the two appalling figures (Soltan and Morsi) he cited as his leaders in his speech from the stage. Tubridy made a good start, but such an in-depth debate is long overdue. 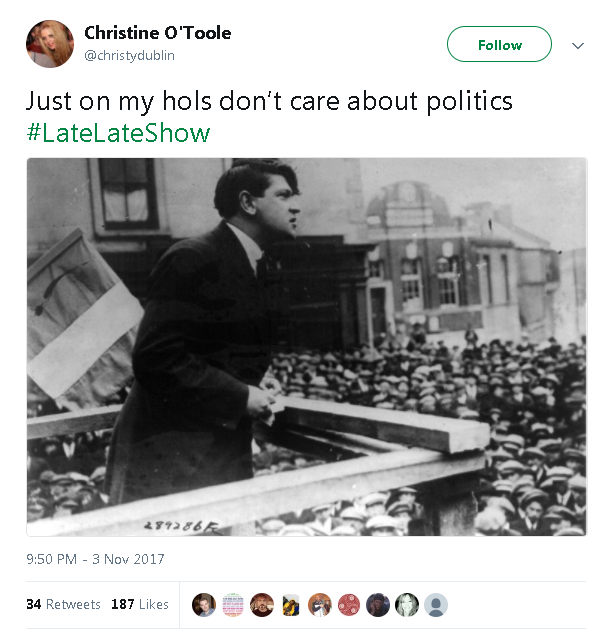 There were lots of amusing reactions to the Late Late like this one.
From here.

An alternative version of the Arabic translation. From here.
Someone should do a comedy version with fake subtitles, like the way people do with Downfall.