This drove the Irish left completely mad. They hated the Celtic Tiger from the start. Year after year, from 1995 to 2008, the left endlessly sneered at the Celtic Tiger, pointed out its flaws, and seemed to long for it to end.

It seems like they got their wish in the banking crisis of 2008 onwards. For the left, the culprit is neo-liberal economics. For me, the culprits are the EU, the Euro, and Brian Cowen's Fianna Fail government.

Ireland remains a low-tax, high-tech, English-speaking, globalised economy. Irish prosperity is not over. But we need a government that puts Ireland first, refuses to pay off debts that are not ours, and dumps the Euro, and even the EU, if necessary. 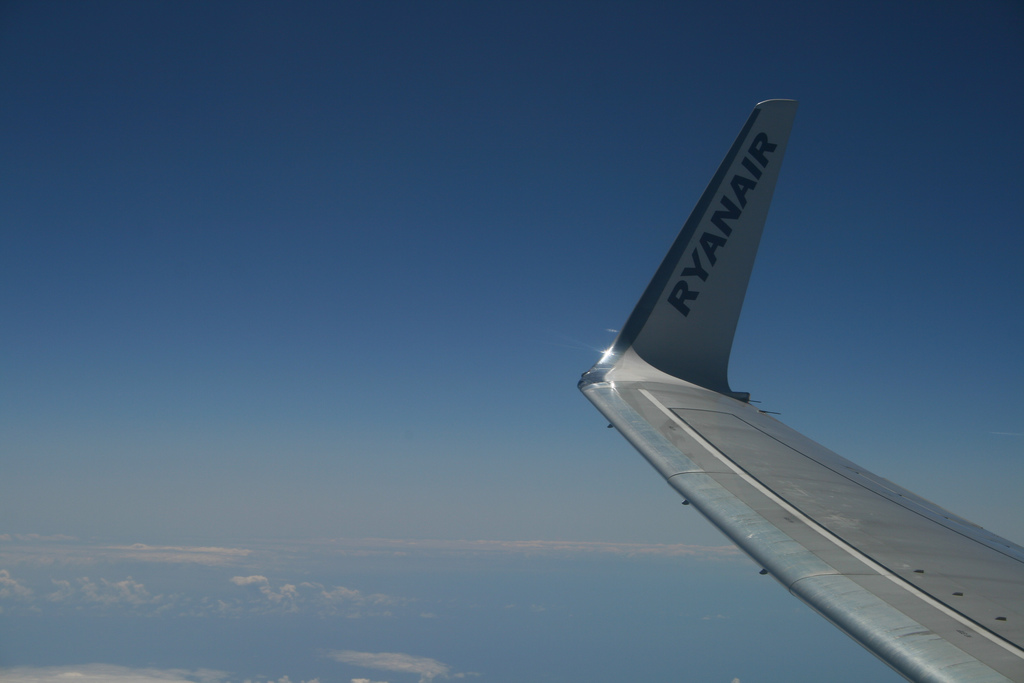 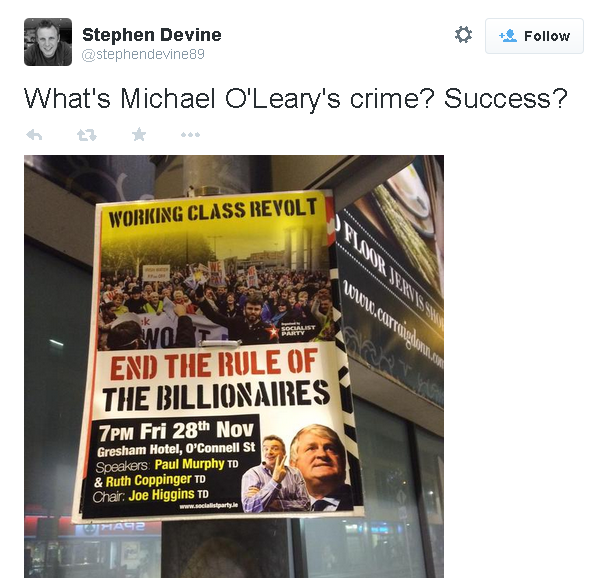 Irish commies are furious with Michael O'Leary because he made it possible for the poorer people of Ireland to travel abroad.
From here.

Close-up of recent years.
Average wealth doubled from 1994 to 2006.
Average wealth tripled from 1986 to 2006.
World GDP per capita actually grew quite well during this period, as you can see if you change the scale.
It's just that Irish growth was so amazing it makes world growth look almost flat. 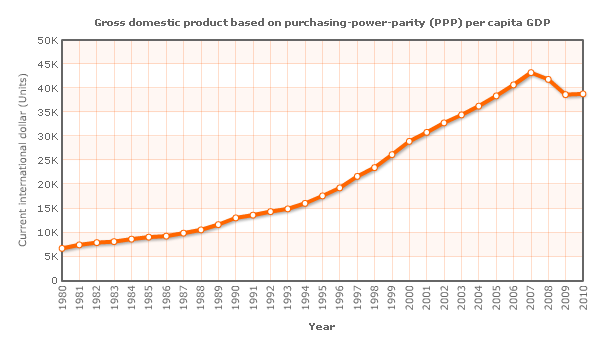 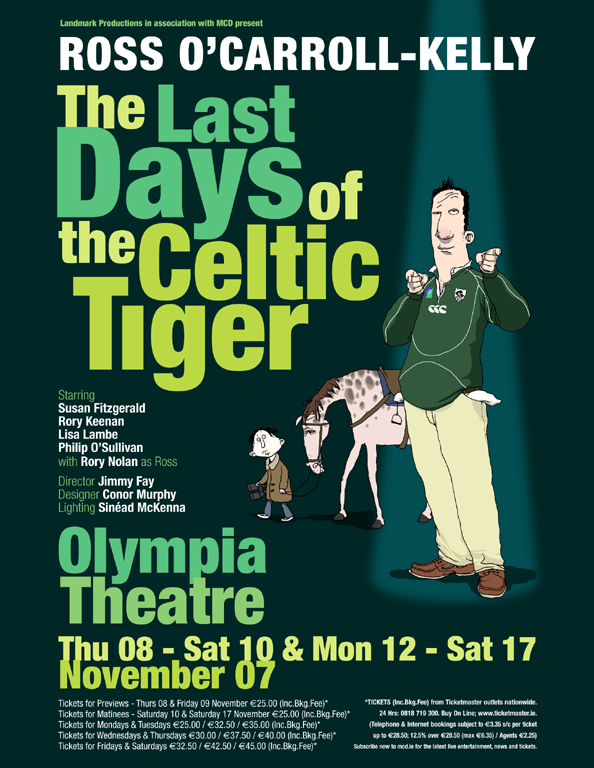 "Please God let it be true", you can hear the left praying, that the Celtic Tiger ends. "Please let this appalling, distasteful wealth end!"
The Irish left, which always hated Irish prosperity, has been hopefully predicting the end of the Celtic Tiger since the very start in the 1990s.

Search for the phrase "end of the celtic tiger" in the news.
After hopefully predicting its demise for years, the left finally got their apparent victory in 2008.


Damien Dempsey produced a hilarious song called "Celtic Tiger" in 2003, with Sinead O'Connor.
I can sum it up as follows: Free-market capitalism ends unemployment and emigration. Artist is not happy but rather whines about it.

Millionaire artists often attack the free market system and the country that made them wealthy.

I would prefer them if they just enjoyed their wealth and were grateful.


R&B artist Akon was made rich beyond his wildest dreams by American capitalism.
He is worth $80 million and lives in this mansion.

GDP growth rates for 2009.
Ireland was one of the hardest hit, but the whole developed world was hit by the crisis.
From here.

Let's look again at GDP per capita of Ireland since 1922.
In 2003, Fintan O'Toole sneered that the "ball" was over for Ireland.
In 2009, Eddie Holt sneered that capitalism was finished: "consumerism has consumed itself. For about 20 years - since the collapse of socialism - it was inevitable anyway. It was just a matter of time."
Yeah, right. What a dream world these left-wing intellectuals live in. What lack of gratitude for the incredible prosperity that Fianna Fail and the PDs have delivered. If they just openly said: "I hate Ireland being rich and I want it to be poor", then at least I could respect them for being honest. But they never say anything so direct. They just sneer at the people who made Ireland rich.

The cause of the Irish crisis

I am no economist, and it is hard for me to judge among the competing explanations for the Irish crisis.

I do not find these convincing as causes:

I find these explanations more convincing: In short, I blame:
David McWilliams warns in 2003 that we don't have the economic tools to control the lending/housing bubble (because we gave them up to Europe).

The Irish people have a mental block about blaming the Euro

While Cowen's FF was rightly blamed, the Irish people seem to have a mental block about blaming the EU and the Euro. 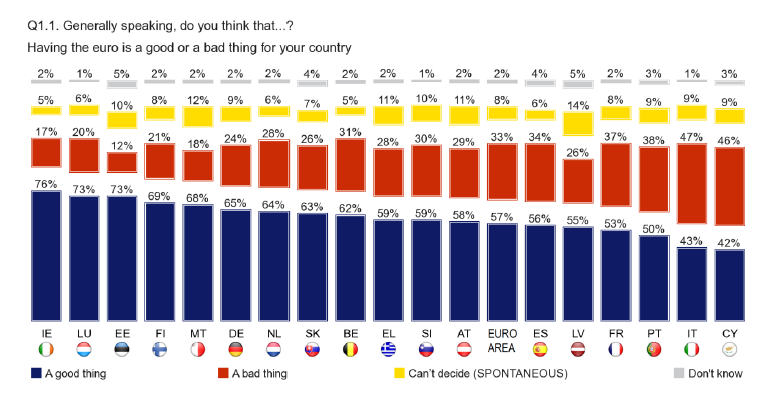 Poll, Oct 2014.
6 years after the Euro destroyed the Irish economy, Irish people still love the Euro. They clearly blame other causes for the 2008 crash.
An incredible 76 percent of Irish think the Euro is a good thing for Ireland. Only 17 percent think it is a bad thing.
In fact, Ireland is the most pro-Euro country in Europe. No wonder I can't find anyone to vote for. 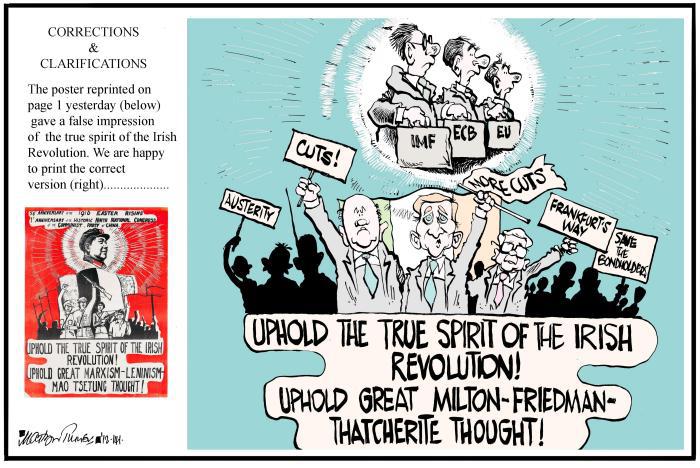 After the discovery of a Maoist poster praising the Irish revolution of 1916, Martyn Turner produced this cartoon in the Irish Times, 4 Oct 2012.
This bizarre cartoon shows the determination of the Irish left to blame capitalism (rather than the EU and the euro project) for the Irish crisis.
As if Milton Friedman and Margaret Thatcher would have been in favour of saving the Euro project! 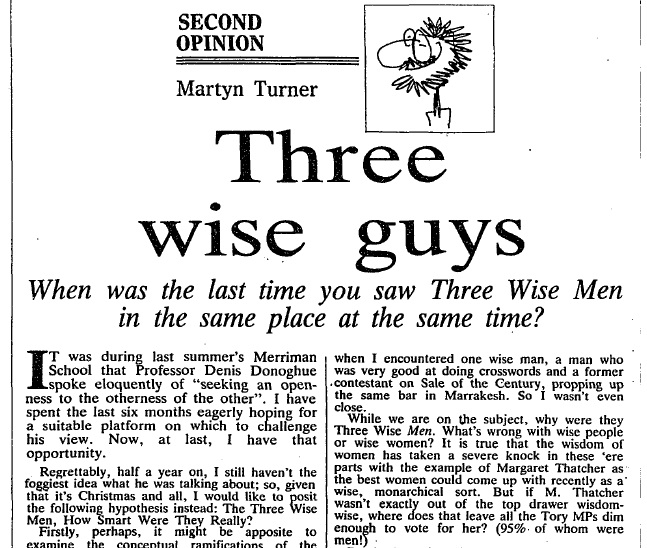 Martyn Turner attacks Margaret Thatcher's intelligence, Irish Times, 21 Dec 1991, p.29.
This was a woman who already - back then - had predicted the Euro crisis!

Whatever saving the banks is, it is not capitalism. Capitalism means letting failed businesses fail. The taxpayer should not be paying for the mistakes of private business.

If you lend billions to absurd schemes that will never pay you back, tough luck. You should lose the money. The taxpayer should not help you.

Vincent Browne takes on Klaus Masuch of the ECB, Jan 2012.
He may be a socialist nutcase on other issues, but I agree with Vincent Browne on this.
Why are Irish people being forced to pay billions to save European bondholders?

Irish prosperity is not over

If we can survive this banking crisis, Irish prosperity is not over. The Celtic Tiger was not all about property. It was also based on a low tax, high tech, smart economy. Right now, even after the crash, there are thousands of job vacancies in my sector - computing in Ireland.

OpenIreland proposes a "Technology Visa" to allow IT-skilled workers and entrepreneurs come to Ireland from all over the world to fill the vacancies in the IT companies here and set up new companies.
Instead of agonising about the failed sectors of banking and property, Ireland should be full steam ahead on the Celtic Tiger sector that still works: IT.