The Internet hackers "Anonymous" are like Wikileaks. They could have been a force for good. But they are ruined by crap left-wing politics. 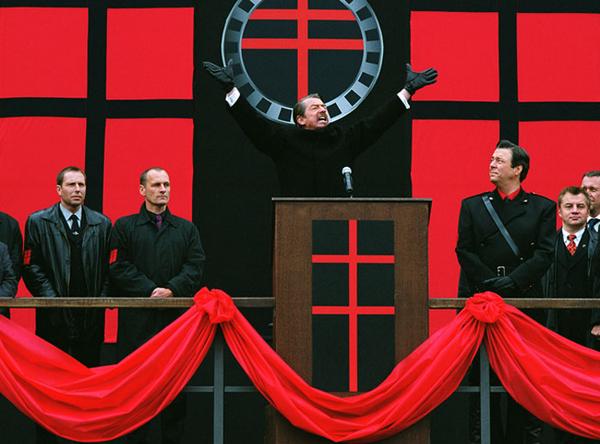 Norsefire says: Attack the websites of the Jews! 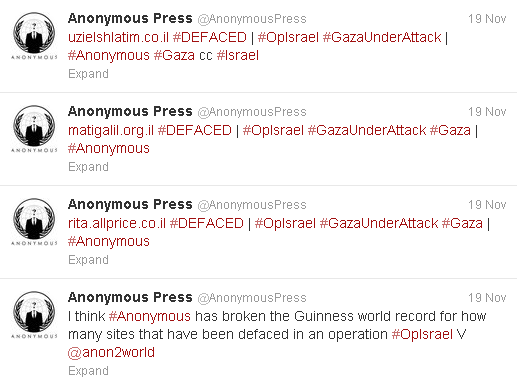 "AnonymousPress" tweets about attacking the websites of the Jews, Nov 2012. 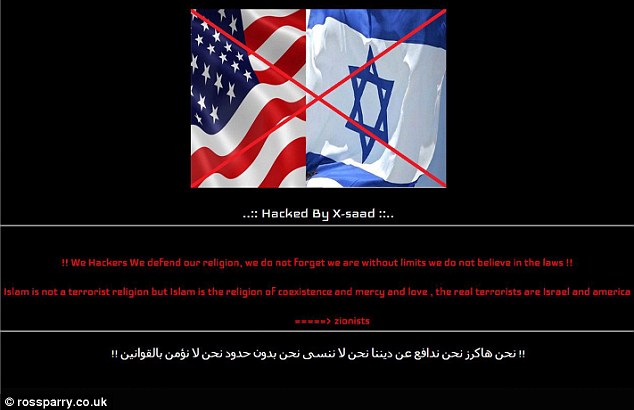 After the massacre of the Charlie Hebdo cartoonists, Anonymous, 8 Jan 2015, attacks anyone who blasphemes against Islam.
Anonymous are just right-wing totalitarians.

Anonymous has made threats against the free, open, liberal democracy of Israel for some time. They finally came out as open supporters of the Palestinian jihad during the Gaza war, 2012. Anonymous are enemy fighters, on the same side as Iran.

This video, allegedly from Anonymous threatening Israel, was posted on 4 Feb 2012 on the AnonymousSolution channel, which was created on the same day.
It uses language about Israel similar to the language of the Iranian regime: "You are unworthy to exist in your current form."
It seems likely this is Iran, not Anonymous.
But Anonymous are such scum that it seemed alright to them, and they reposted it on the real TheAnonPress channel in Feb 2012, where many of their supporters approved of it. Eventually they removed it.

Anonymous threatens Israel, Mar 2012.
This is found on the main TheRealAnonMessage channel.

"YourAnonNews" tweets about attacking Israel, Nov 2012.
From here and here.
And more.
Anonymous are tools of jihad, fighters for tyranny. 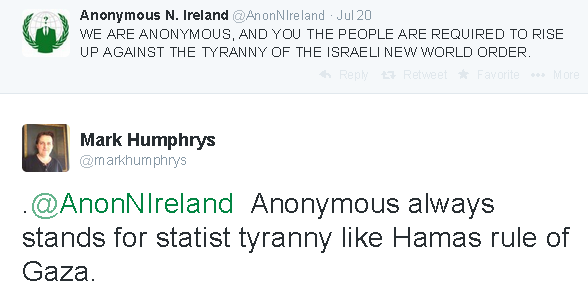 The mask of the statist and the Israel hater

I don't know about you, but whenever I see those damn V for Vendetta masks now, I think "collectivist", "communist", "statist", "tribalist", "Jew-hater", "Israel-hater" and "jihad-lover". And in general, an enemy of western liberal values and a friend of foreign totalitarians. 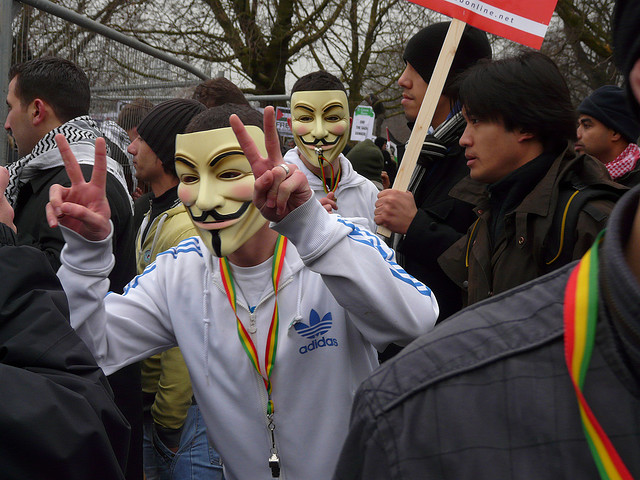 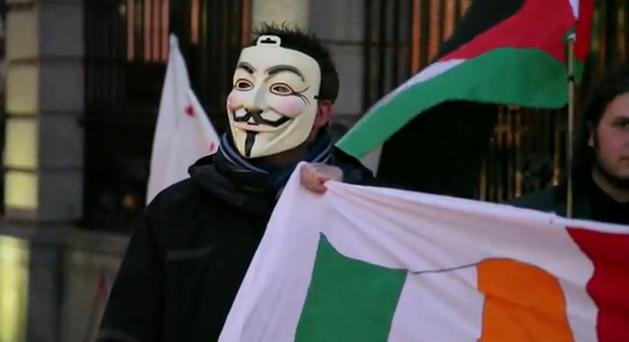 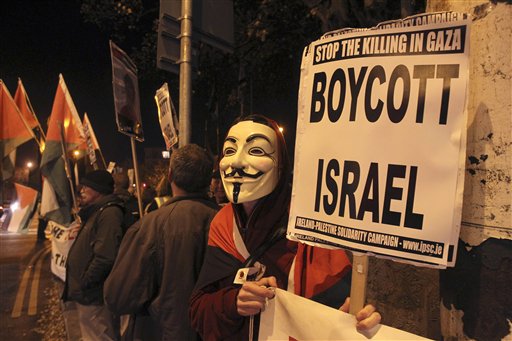 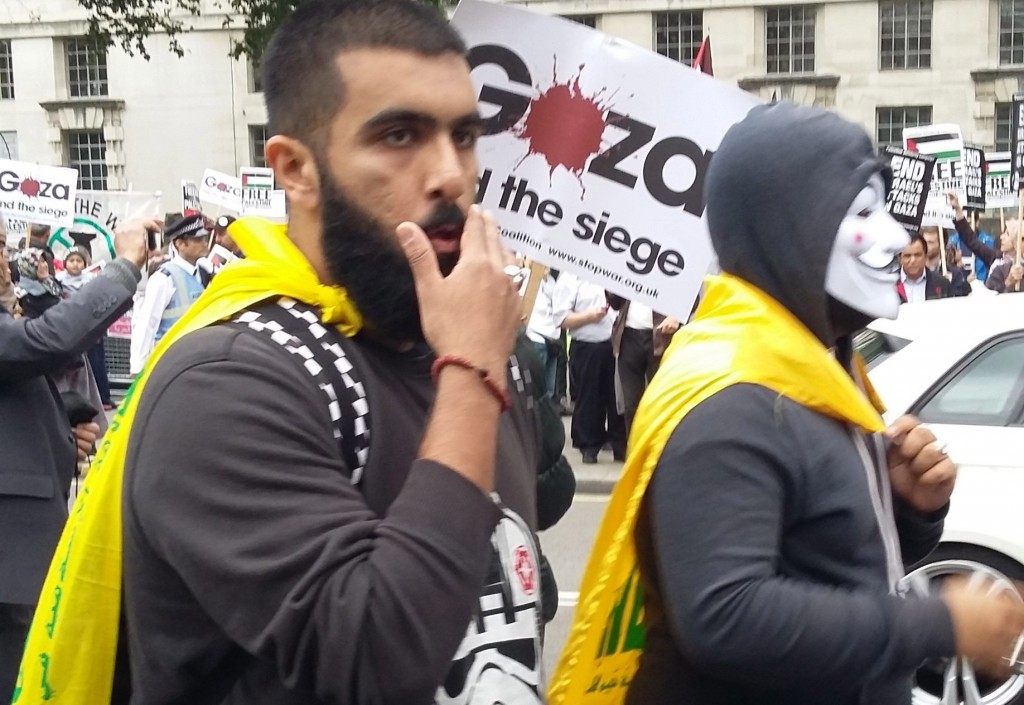 The mask of nazis and anti-semites:
V for Vendetta mask and Hezbollah flag at anti-Israel demo, London, Sept 2015. 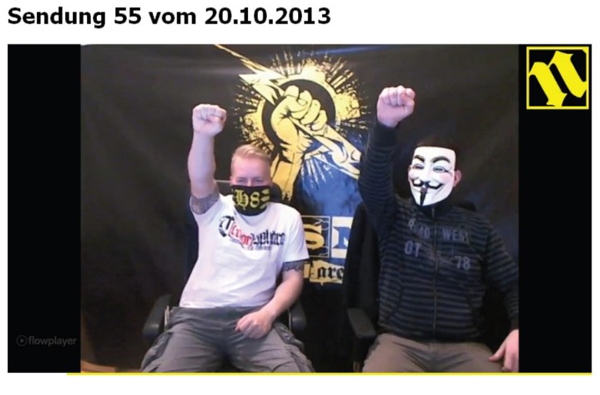 German neo-Nazis use the V for Vendetta mask.
Poor Norsefire! The neo-Nazis prefer V!
From here. 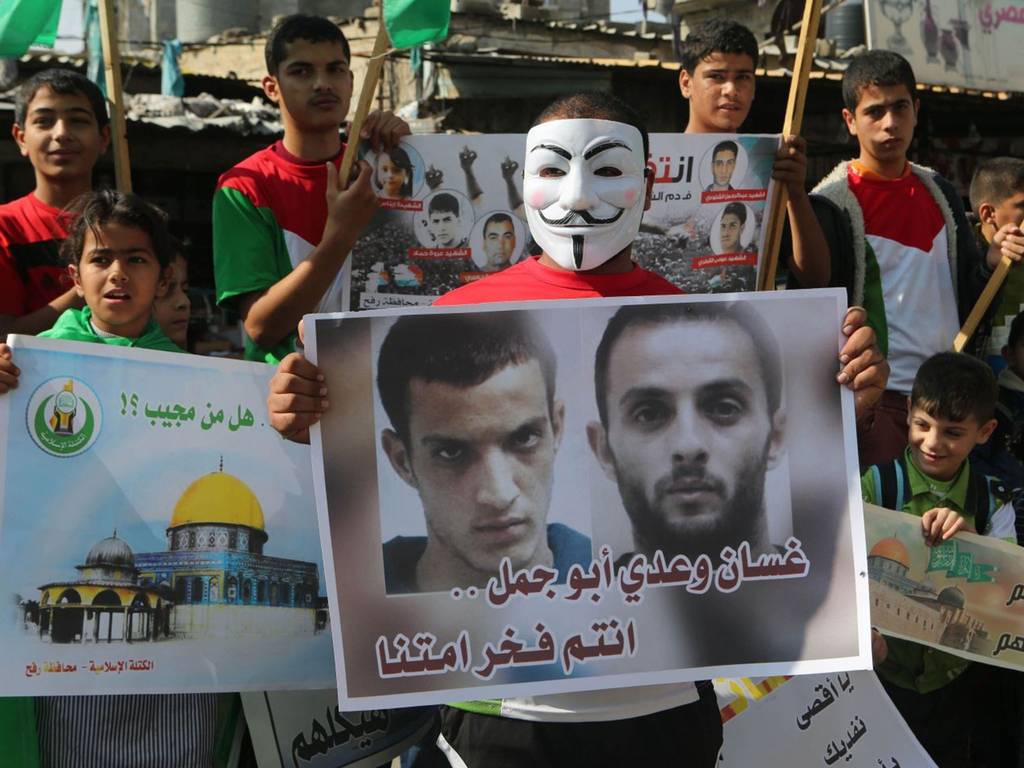 V is the mask of fascism, nazism and anti-semitism.
This guy is celebrating the 2014 Jerusalem synagogue massacre.
From here.

Valerie's story in V for Vendetta.
Iran and Hamas do this to gays.
Israel has gay pride and gay freedom.
And Anonymous are on the side of Iran and Hamas against Israel. 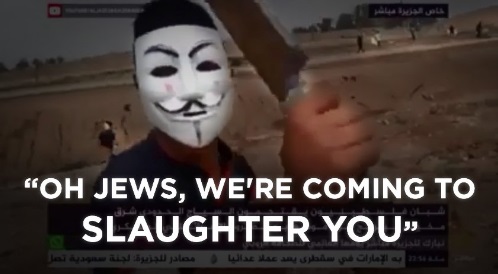 "Oh Jews, we're coming to slaughter you!" shouts an armed Palestinian in a video as he breaks through the Gaza border fence in 2018.
His mob was stopped before they could slaughter local Jews.
This sums up what the V mask means now.

"When it comes to privacy, the only thing more creepy than government is Anonymous. Who elected them?"
- David Burge, 4 Feb 2013, sums up the problem.