It is clear from video footage, though, that the Israeli soldiers would have been killed if they had not opened fire.


The radical Turkish Islamists of the IHH reveal the day before (30 May 2010) that they are planning violence.
Bülent Yildirim, leader of the IHH, says: "And we say: "If you send the commandos, we will throw you down from here and you will be humiliated in front of the whole world." ... If they board our ship, we will throw them into the sea, Allah willing!"
The whole speech is full of "Allah" and martyrdom.
When later asked by Panorama to respond to this video, he said: "I spoke correctly there ... we're not denying it. If we organised another boat and Israel attempted to illegally invade it, we'd use our right to passive resistance. We'd throw them into the sea."
That would be "passive resistance" apparently!

The violence was all on the ship operated by the radical-Islamic Turkish IHH group.
None of the other ships were violent.
On the Turkish IHH ship, groups of passengers surrounded Israeli soldiers and beat them with metal poles and chairs, and threw one soldier over the side of the ship. Some passengers grabbed pistols from the IDF soldiers and opened fire. 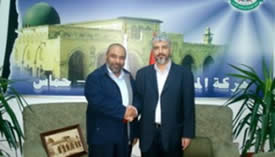 Bülent Yildirim, head of the Turkish IHH, with Hamas' Khaled Mashaal, 2009.
From here. 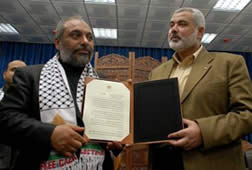 Bülent Yildirim of the IHH with Hamas' Ismail Haniya, 2010.
From here. 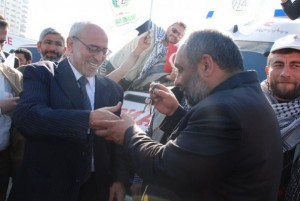 Bülent Yildirim of the IHH hands the key of a convoy vehicle to Hamas' Ahmad Kurd, 2010.
From here.

Islamists on the flotilla heading to Gaza, 30 May 2010, chant about the Battle of Khaybar in 629 AD, when Muhammad slaughtered the Jews and ended the Jewish presence in Arabia. (Muhammad also took one of the captive Jews as his "wife" after he tortured and killed her husband. He consummated his "marriage" that very night.)
One Islamist here says she joyfully expects "Martyrdom" if she does not reach Gaza.
Copy here.

Islamist on the flotilla says they are all planning in advance to fight the Israelis.
He hopes to be a martyr.
And here and search:


"Free Gaza" activists attack the Israeli forces as they land on the Turkish IHH ship.
As John McGuirk says: "Being attacked with knives and sticks and iron bars made live fire almost inevitable."

Violence on the Turkish IHH ship.

Weapons found on board the Turkish ship. More here.
The weapons (and here and here) included metal rods, slingshots, knives, smoke torches, wrenches, electric saws, gas masks, and molotov cocktails.
The moral of the story for the western anti-Israel peaceniks is: Next time, don't invite the Turks. 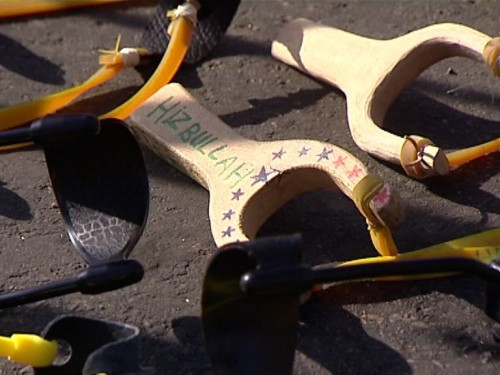 Hezbollah slingshots found on the ship.
From here. 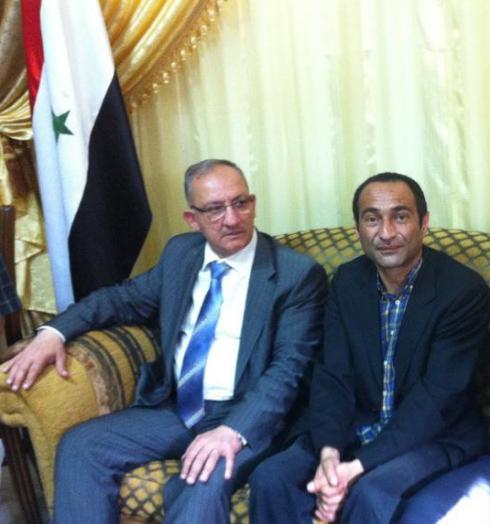 The leader of the depraved "Viva Palestina" convoy (right) is welcomed by a member of the Assad regime (left) as the convoy arrives in Syria, May 2012.
From here. Also here.

"We Con the World"


"We Con the World" (see site) sums it up.
Video by Caroline Glick and others.

The "Freedom From Jihad Flotilla" 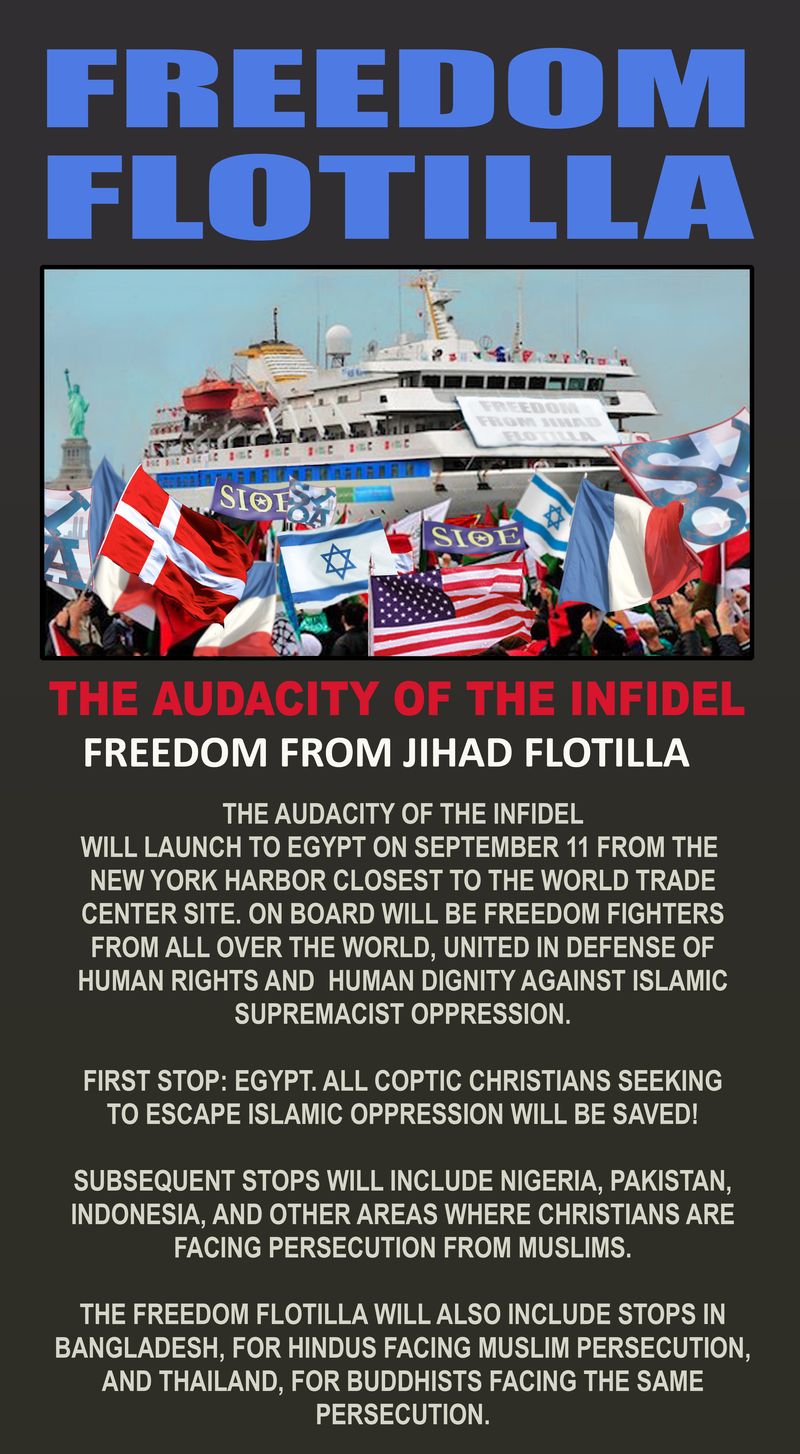 The kind of flotilla I could support:
An interesting counter-jihad response to the Gaza "freedom" flotillas.
The "Freedom From Jihad Flotilla" (or the "Audacity of The Infidel") says it will sail to Islamic states and rescue people oppressed by sharia and jihad.
"The mission is the first attempt by free citizens anywhere in the world to come to the aid of non-Muslims persecuted for their faith in Muslim countries."

A clever edit of an interview with Gaza "freedom" flotilla leader Huwaida Arraf, pointing out that the people really in need of rescue are the 1 billion people oppressed and threatened by sharia and jihad worldwide.

"Shut up, go back to Auschwitz!" - The reply of one of the flotilla ships

when the Israeli Navy asked them to stop.
"Jihad, jihad, jihad!" replied another ship.