Islam in Ireland - The Blanchardstown mosque

Umar Al-Qadri of the Blanchardstown mosque in Dublin has been promoting himself as an Irish Muslim who stands against Islamic extremism and terror. As such, he gets a free ride from the Irish media. But there are many problems with what he says.

Umar Al-Qadri took over the rotating "Ireland" Twitter account for a week in Sept 2015.
Amid a lot of evasion and absurd nonsense (and even one or two bits of sense) he came up with this piece of comedy gold.
"If Israel stops this then ME will be peaceful". Hilarious. Pure genius.

This disturbing video was here but was deleted. Luckily, I saved a copy for you to watch. Click to play.

Umar Al-Qadri of the Blanchardstown mosque attacks Israel at a protest in Dublin in Jan 2009. 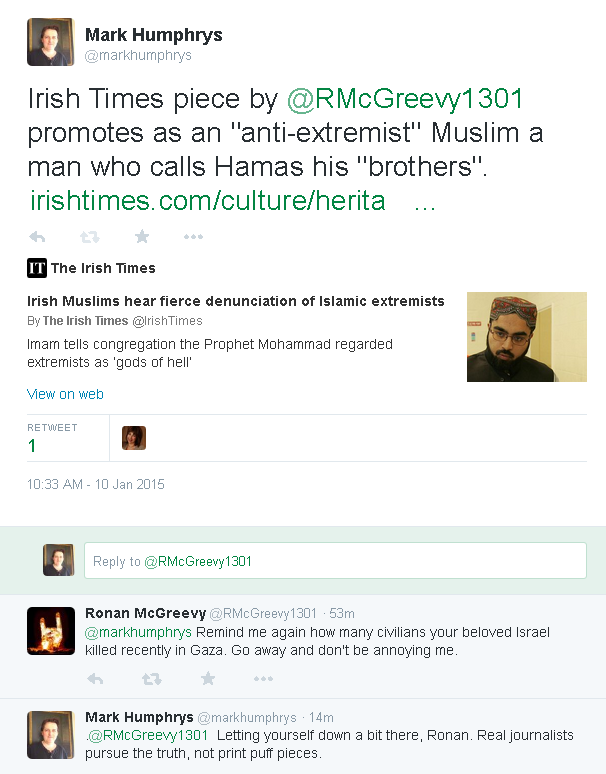 Irish Times journalist Ronan McGreevy, 10 Jan 2015, promotes Umar Al-Qadri as a "fierce" opponent of "extremists".
I call him out on it, noting Umar Al-Qadri's support for Hamas.
He is not interested. A good journalist would have replied: "Where did he say that?"

Al Qadri attempts an "explanation" of his 2009 speech in March 2016: "At that time I was not familiar with reality of Hamas. I thought it was a elected party only."
Um, no. First, only a total idiot could not know in 2009 that Hamas had been carrying out terrorist attacks for years, including high-profile suicide bombings, and was currently firing rockets at Israel.
Second, even if Al Qadri claims to be that idiot, his "explanation" does not fit with what he says in the above speech. 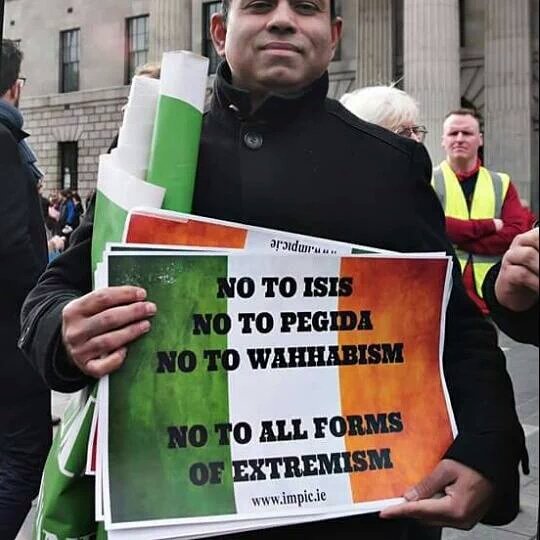 Al Qadri's organisation IMPIC claims to oppose Islamic extremism.
But is there a version of their poster with "No to Hamas. No to Sharia"?
If not, their words are empty.
Photo from Feb 2016 demo in Dublin.

I would like to debate Al-Qadri on Twitter but he blocks me.
When he briefly emerged to take over the "Ireland" account for a week, he was asked why he blocked me. He said: "I blocked you because you misquoted me". He was repeatedly asked both online and even in person what the misquote was, but so far no clear answer. 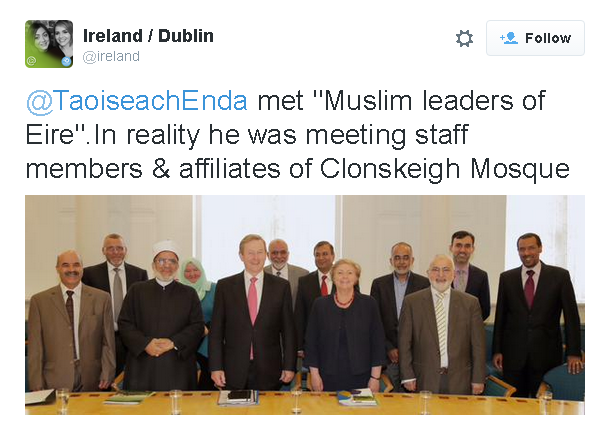 Let's be nice to Al-Qadri before I end.
In his time at the rotating "Ireland" account, he did come up with this excellent tweet.
The Taoiseach meets people from Clonskeagh mosque in June 2015. "Taoiseach, Minister Fitzgerald and Muslim clerics at meeting in Government Buildings on 4th June, 2015 under Church State Dialogue."
All over the West, governments partner with extremist Muslims who they imagine represent "the Muslim community". Often these are just the loudest and most aggressive voices.
The Irish government is deep in bed with the Muslim Brotherhood as a result.