For woke people, discussion of sensitive issues to do with sex should be done in an atmosphere of hysteria, where you are "cancelled" if you say the wrong thing. Whether the topic is proof in sex abuse cases, or age of consent laws, or trans issues, woke people believe it should be discussed in an atmosphere of screaming hysteria with a constant threat of a cancel mob against those with the wrong opinions.

More than any other issue, it is trans issues that woke people believe should be discussed in an atmosphere of screaming hysteria. Those who fail to have the correct opinions, or even use the wrong pronouns, should be censored, banned, sacked and prosecuted. That is how woke people think we should discuss this issue. I'm not kidding.

Here is what I think.

My answers to questions 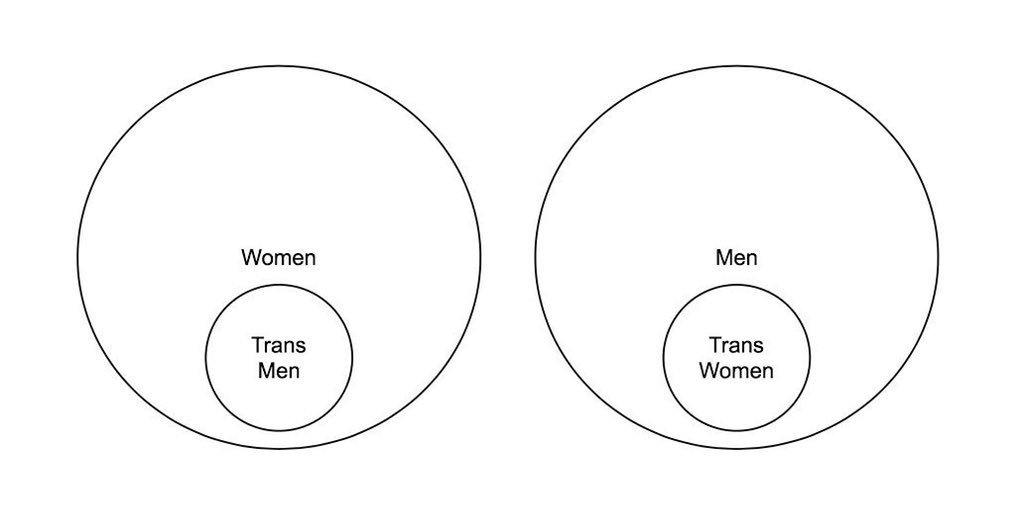 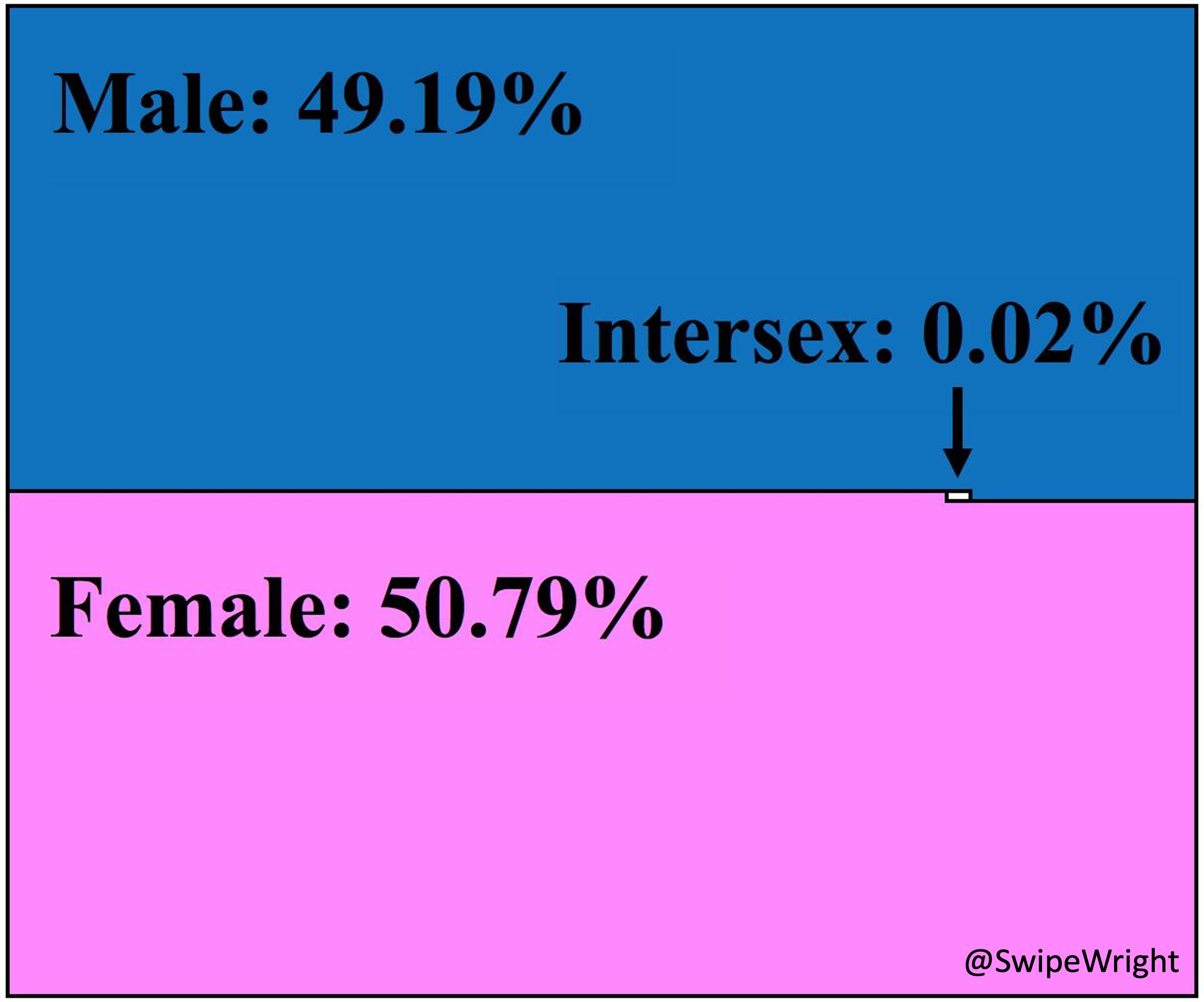 Diagram shows how a tiny number of exceptions does not disprove the basic binary nature of sex.
From here. 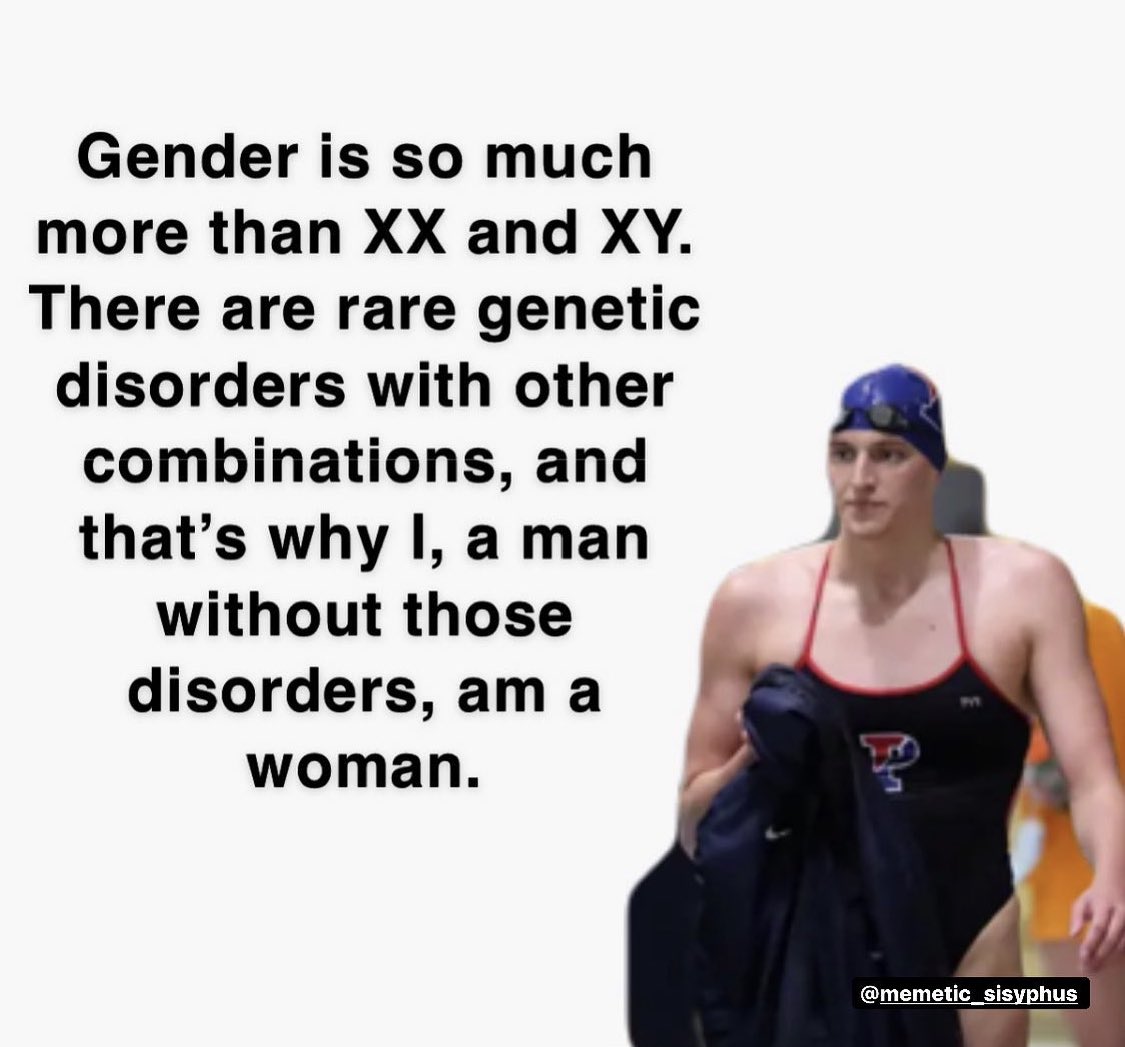 What is a woman?

Trans activists confidently say: "Trans women are women". But that statement has no meaning unless you can define what a "woman" is.

People say that trans rights are like gay rights in the 1970s. That this is just a re-run of old arguments about tolerance. But that is not true. Gay rights only asked us to allow gay people live their lives in peace. It was easy. Trans rights (at least as commonly phrased) require us to accept a new philosophical model of the universe.


Matt Walsh asks "What is a woman?"
He will never get an answer.

"What is a woman?" is a great question.
Here, women at the Women's March cannot define what a woman is.

Students (except one) cannot define what a woman is.

Lib Dem leader Jo Swinson is asked "What is a woman?" and she cannot answer.

Labour Shadow Secretary of State for Women and Equalities, Anneliese Dodds, is asked "What is a woman?" and she cannot answer.
See transcript of original interview.

Supreme Court nominee Ketanji Brown Jackson is asked "What is a woman?" and she cannot answer. 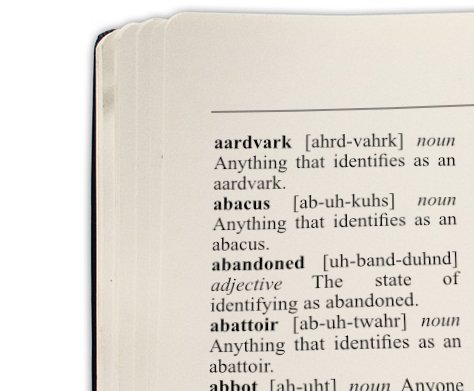 Some people answer "What is a woman?" by saying: "A woman is someone who identifies as a woman".
Which sounds clever for 5 seconds, until you realise it is the same as this definition: "A woman is someone who is a woman".
It is not a definition at all. It leaves completely unanswered what a "woman" is.
The image above (found online) shows what it would look like if we used such "definitions" for all words.

The quasi-religious nature of trans claims

Many people have noted the quasi-religious nature of trans claims, the peer pressure to agree with them, the lack of evidence given for them, the lack of any calm debate about them, the near-mystical redefinition of words, and the punishment of unbelievers, by banning or sacking or even prosecution. Religion finds a way. If humans do not believe in old religions, they will believe in new ones. 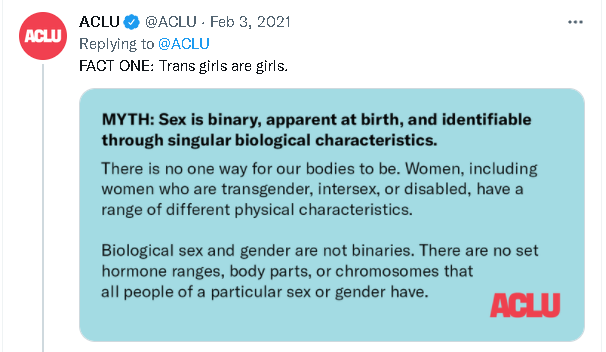 The ACLU in Feb 2021 has a quick catechism of some beliefs of the new religion, which it absurdly calls "FACTS".
They are of course not facts at all, but just religious assertions.
For a religion that did not exist in 2010!

Atheists argue about the new religion

The new religion has hoovered up many atheists. Some atheists believe in it. Some do not.

Atheist and evolutionary biologist Richard Dawkins issued this tweet in Apr 2021.
He asked what is the difference between trans-gender people and trans-racial people like Rachel Dolezal.
It is a good question and I have never seen it answered.

Dawkins' tweet angered atheists who believe in the new religion:

"The Friendly Atheist" Hemant Mehta, Apr 2021, attacks Richard Dawkins for the tweet above.
He declares it as a fact that trans-gender people are the other gender.
Mehta says: "Trans people ... aren’t changing genders just for the hell of it. ... They don’t “choose to identify” as the other gender as if it’s some kind of light switch; they are the other gender. ... Dawkins .. defines trans women as “men [who] choose to identify as women” (and vice versa) when that’s not the case at all. It’s not merely a question. There’s nothing to “discuss.”" 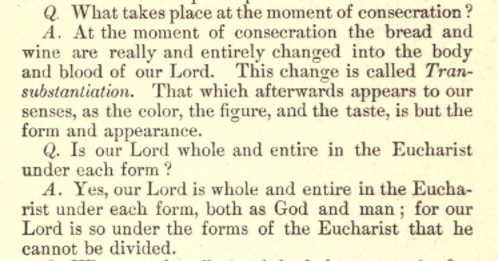 The 1850 version of Hemant Mehta explains to us that the eucharist really is the body and blood of Christ.
That is how I feel when I am told that some chap with a penis and testicles really is a woman. It just feels like a religious declaration to me.
From p.215 of the Catechism of perseverance (1850).

Punishment of people for not believing in trans ideology

Since 2015, trans ideology has made it very clear that it is opposed to free speech and freedom of debate. Across the West, people are censored, banned and even prosecuted for disagreeing with aspects of trans ideology.

Most people's sexual identity is not recognised 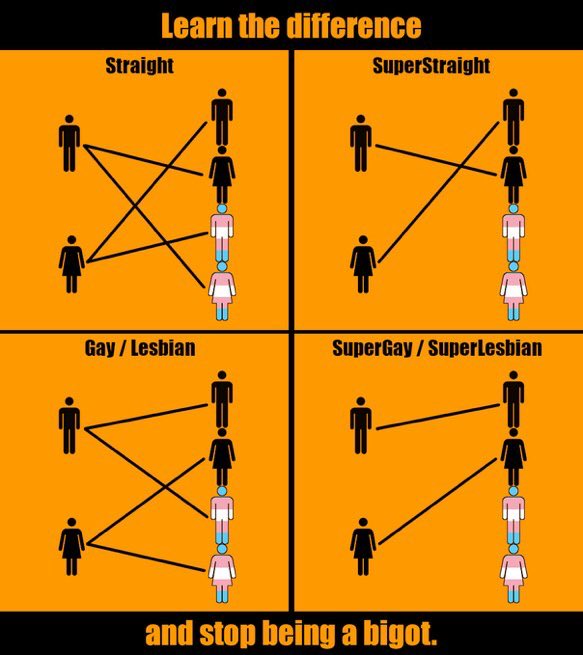 Most people are "super-straight" 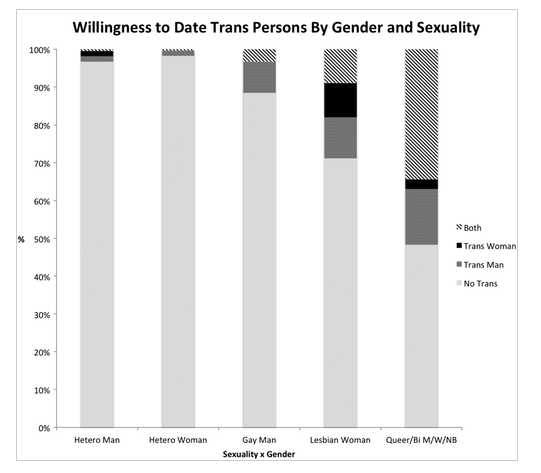 All sexual identities are recognised except super-straight 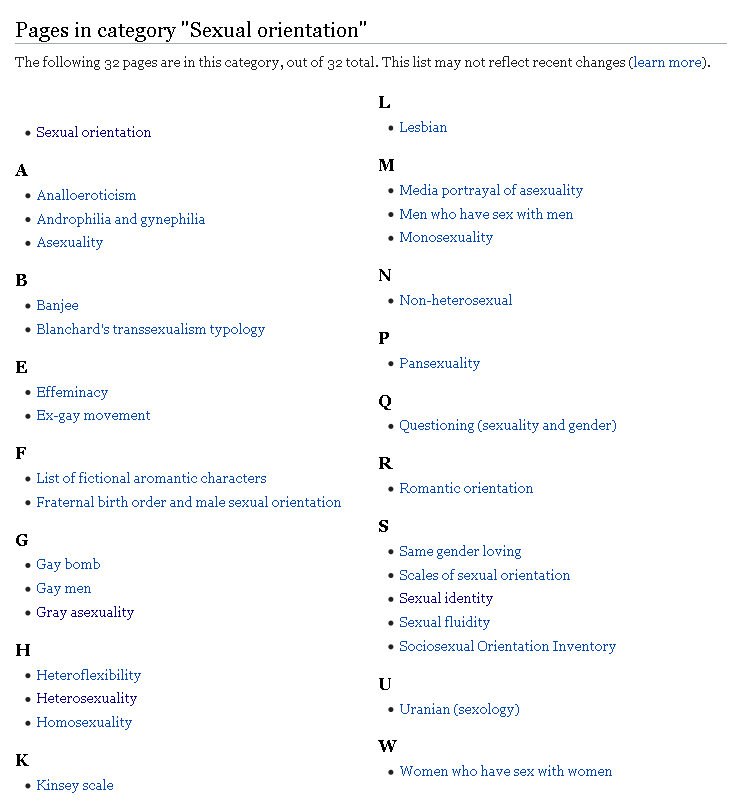 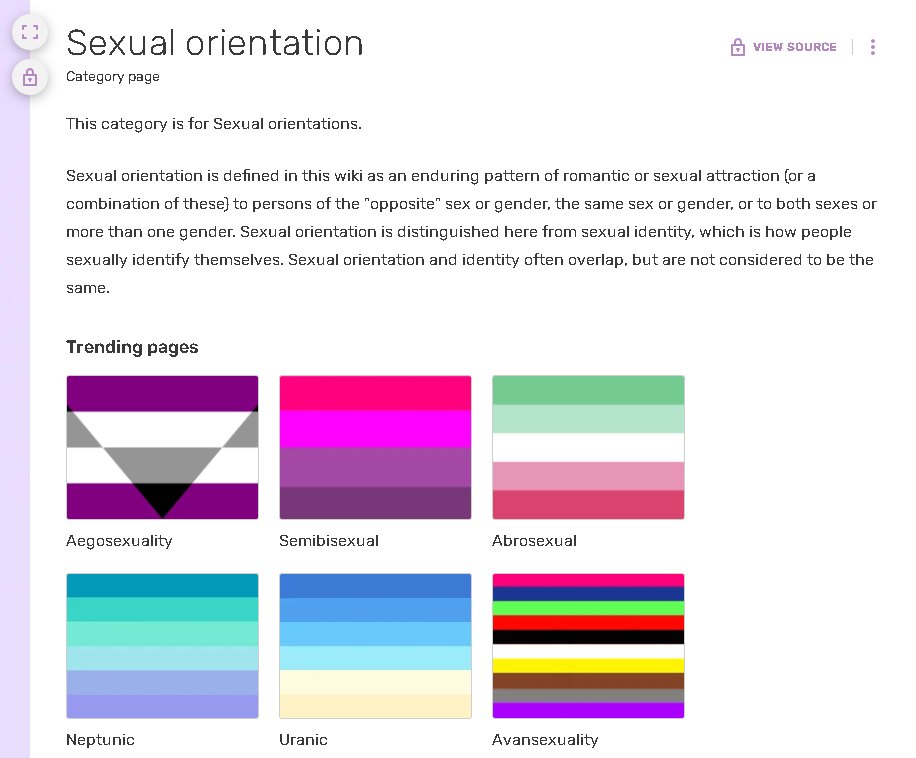 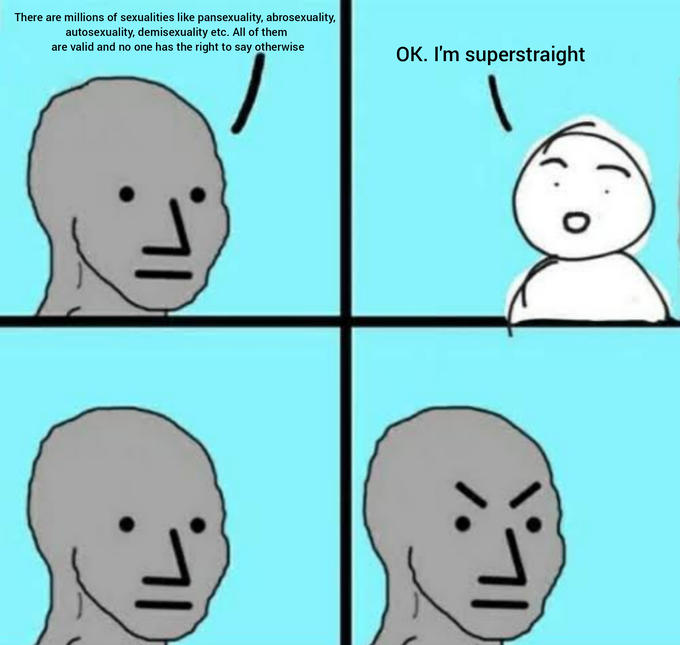