The Halawa case - The Irish left and the Halawas - Donal O'Keeffe

Of all the insufferable leftist defenders of Irish Islamist prisoner Ibrahim Halawa, journalist Donal O'Keeffe is perhaps the most insufferable. Combining an almost total ignorance of the case with virtue-signalling that could be seen from the moon, he epitomises the worst of the Irish left.

The Muslim Brotherhood and the misery it causes around the world is a deadly serious issue. But all Donal O'Keeffe sees is skin colour, and a chance to declare that he is not a racist.

Donal O'Keeffe is the master of perhaps the worst argument of the entire Halawa case: "It's because he is brown." He says the reason that many Irish people do not support the radical Islamist prisoner is because he has brown skin and we are racist.

Of course, O'Keeffe has it backwards. Halawa only has support because he is brown. If he was white Irish, and got into trouble supporting an anti-semitic Aryan Brotherhood type organisation abroad, no one in Ireland would care. The reason some Irish support Halawa is exactly because he is brown, and they want to display their multicultural credentials. 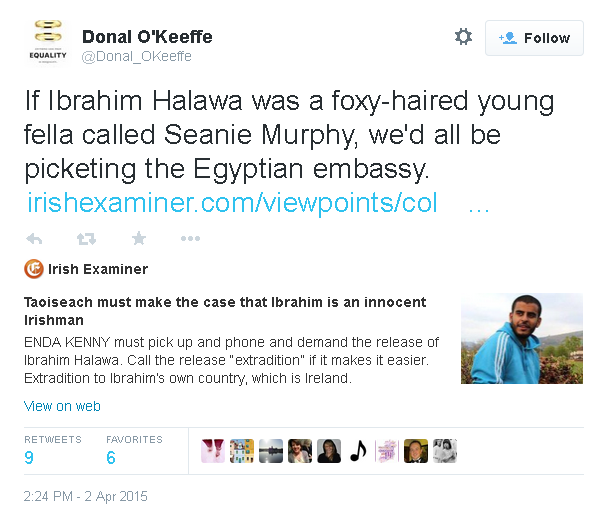 Donal O'Keeffe's great argument appears in 2015.
He doesn't have to carefully research new facts, like I do. He just has to signal that he is not a racist. 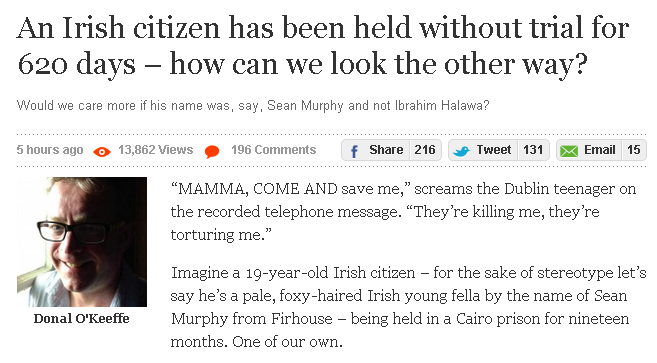 O'Keeffe expands this into a ludicrous article about Halawa, 30 Apr 2015.
He implies that racism is the only possible reason why people do not like an Islamic extremist.
He claims that the rally of pro-sharia Muslim Brotherhood extremists was "a pro-democracy protest".

I sent O'Keeffe the real facts on this thread.
All I got from him was hot air and bluster, and then he blocked me. Pathetic stuff.
Everyone who dislikes the Muslim Brotherhood is a racist, apparently.

Later, O'Keeffe unblocked me, and we debated for a while. Until the inevitable. 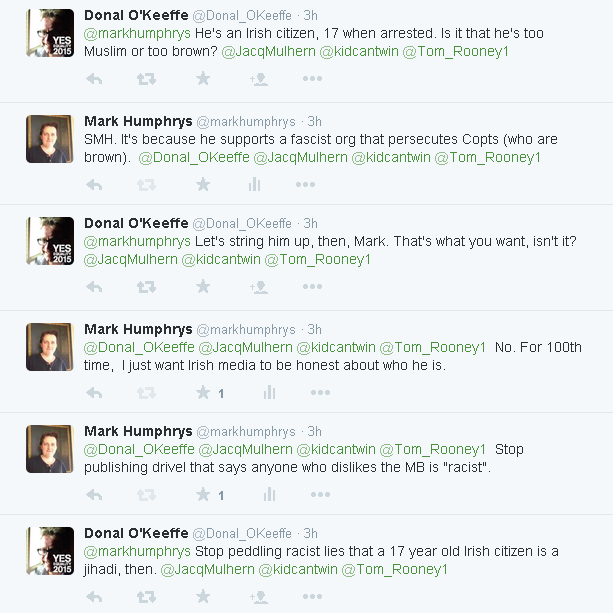 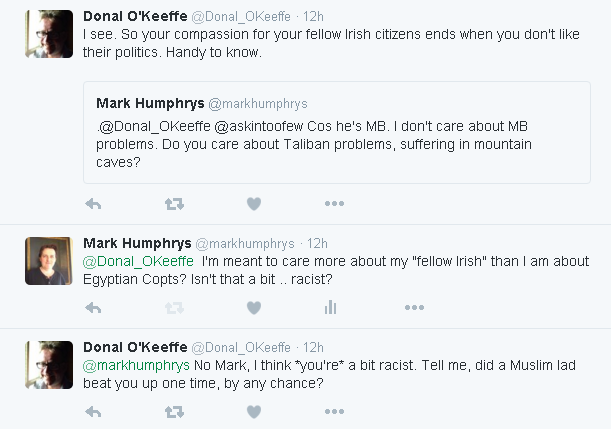 Later, in Dec 2015, he unblocks me, and we have another debate.
But when he runs out of arguments, it ends in the same stupid place.
Calling me a racist is of course defamation.

O'Keeffe carries on peddling his brain-dead "racist" argument: Perhaps to Irish eyes, Ibrahim Halawa's crime is that he's a bit too Muslim and a bit too brown, Donal O'Keeffe, June 8, 2016.
He sneers at the counter-arguments to his Halawa story. But he doesn't have the guts to link to them.

Unable to debate me, O'Keeffe finally targeted my employer, hoping to make trouble for me at work to shut me down. Disgusting tactics. So I block him now. I will not debate people who use such tactics. 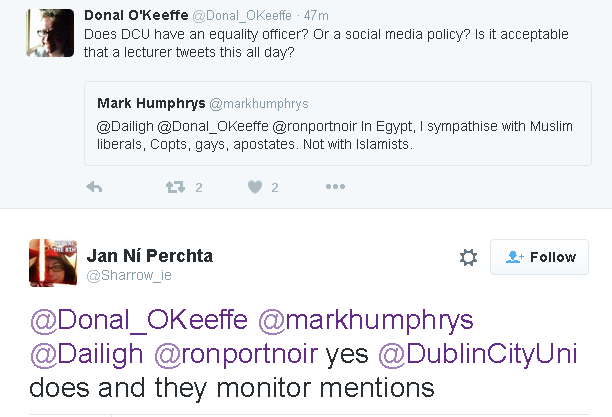 O'Keeffe continues his campaign to get me sacked or censored, Nov 2017.
He does not make (and never has made) any attempt to explain what the "defamation" is. I'm not even sure what part of my Halawa research angers him. Just the concept of criticising Halawa, I guess.
Ironically, of course, O'Keeffe has defamed me, by calling me a "racist".
If anyone can be sued here, it is clearly Donal O'Keeffe. 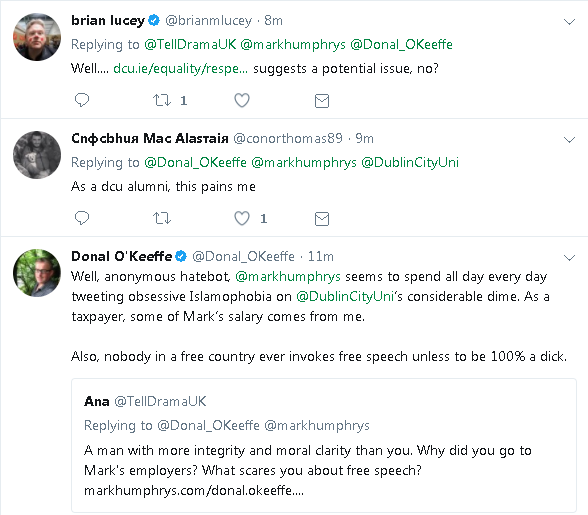 He harasses my employer again.
In Feb 2018, the Clonskeagh mosque hit the news because one of its leaders supported Female Genital Mutilation.
Donal O'Keeffe and Brian Lucey both targeted my job for criticising the FGM mosque. 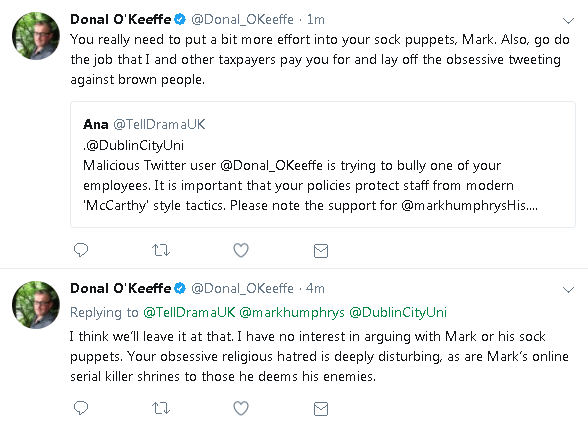 When a user tried to defend me, Donal O'Keeffe decided it must be me under another name!
What a horrible man. Truly he is the most horrible person on Irish twitter.
Again one must be reminded that at no point do I ever bring DCU into my tweets. He is the one forcing DCU into them.

O'Keeffe's big argument - "If his name was Sean Murphy we would all support him" - has been used by other people who know nothing about the case and only see skin colour. 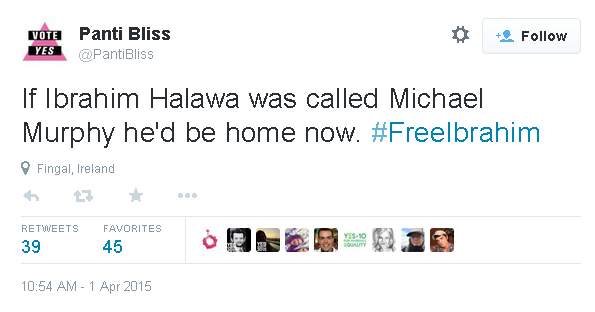 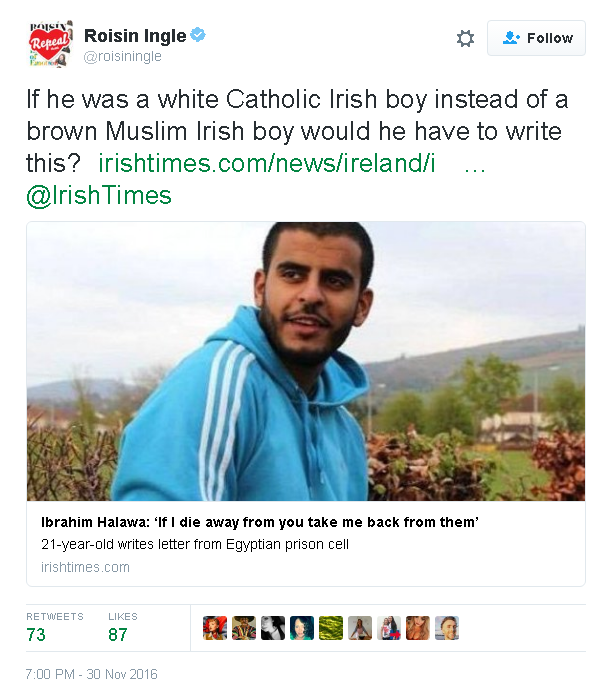 Irish Times journalist Roisin Ingle promotes the argument.
None of the people retweeting this know anything about the Halawas, or want to know.
They just like signalling that they are more tolerant of brown people than most Irish are. 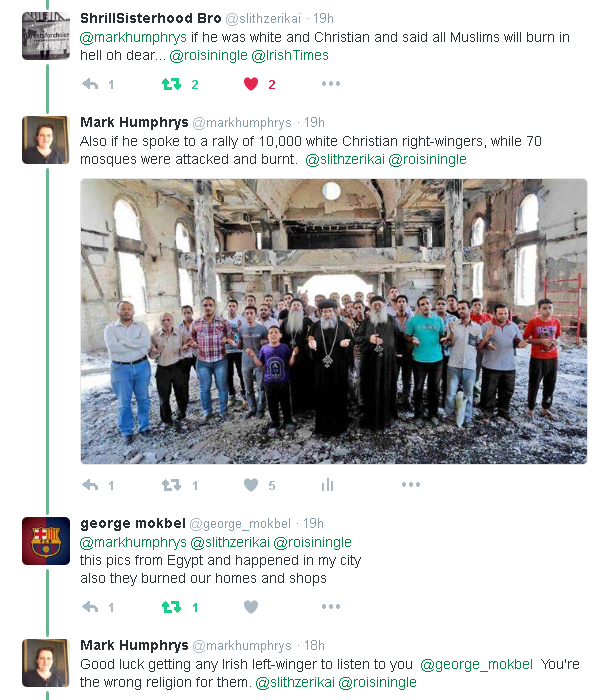 An actual Egyptian Copt appears on the thread and talks about how the MB victimised his community.
The virtue-signalling leftists don't give a shit.
He is "the wrong sort of brown".

Irish feminist Janet O'Sullivan appeared on a Donal O'Keeffe thread, and provided an incredible example of the double standards of the Irish left.

The same person, 18 Dec 2015, tries to get me sacked for criticising the Muslim Brotherhood and radical Islam.