The Irish left and Israel - Anti-Israel Irish on Twitter

Anyone on Twitter or other social media will soon spot the vast number of anti-Israel Irish people.

When I have time, I argue with this infinite supply of morons. 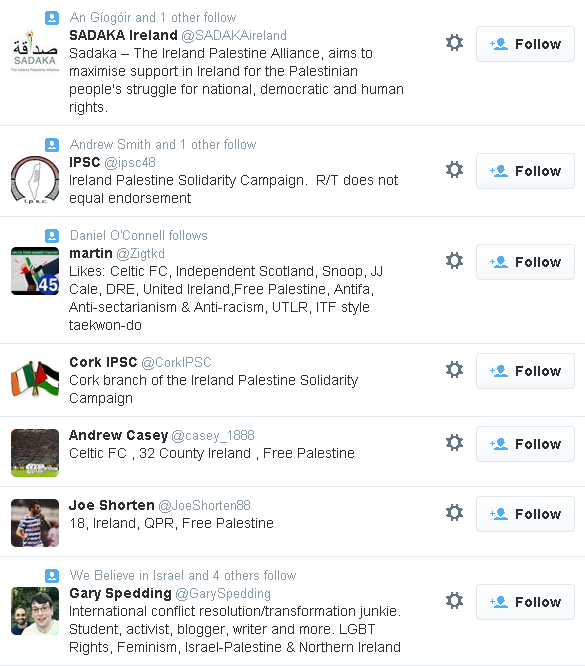 An infinite supply of morons. 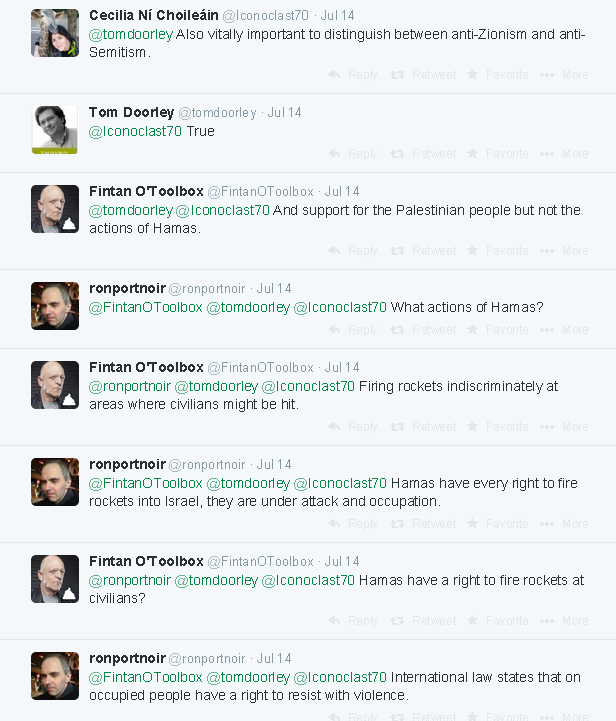 Irish leftist "ronportnoir" comes out as an open supporter of Islamic jihad terror against the Jews.
"Hamas have every right to fire rockets into Israel".
Fair play to atheist "FintanOToolbox" for calling him on it.
From July 2014 thread. 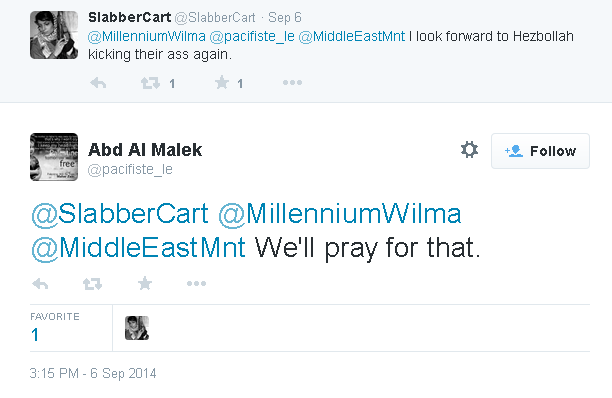 "SlabberCart" is a "Citizen of the world residing in Ireland".
"SlabberCart" has a terrorist avatar.
"SlabberCart" supports Hezbollah in this thread.
The other person, despite the handle "pacifiste_le", is gung-ho in favour of terrorist war and violence. 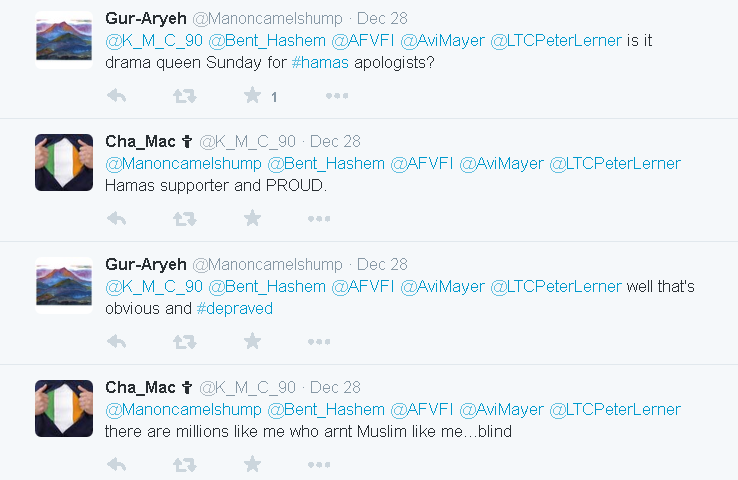 A remarkably common sight on Twitter:
"K_M_C_90" declares on 28 Dec 2014 that he is Irish, not Muslim, but still a supporter of the Islamic religious jihad against the kuffar.
See lots more support for Hamas from this person.
He also supports IRA terror. 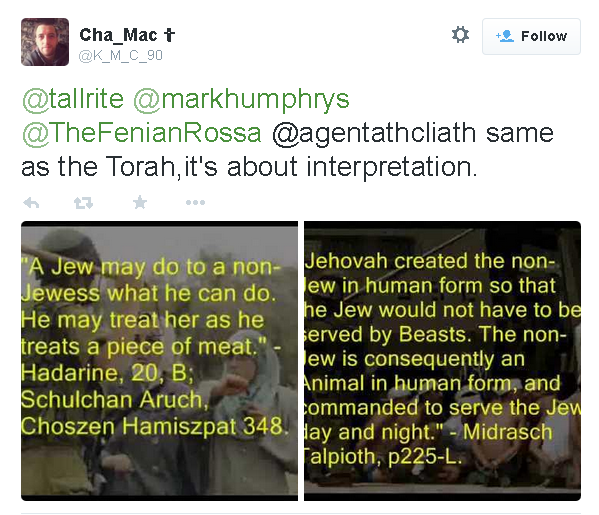 "K_M_C_90" promotes fake quotes from Nazi sites.
Though in fairness he later admitted he was wrong.

Not someone on Twitter, but so shocking I felt the need to note it:
Irish republican "Nodin" on boards.ie, 2 Oct 2015, says Jews living in the wrong area should die.
He is defending the cold-blooded shooting of a Jewish mother and father in front of their small children. 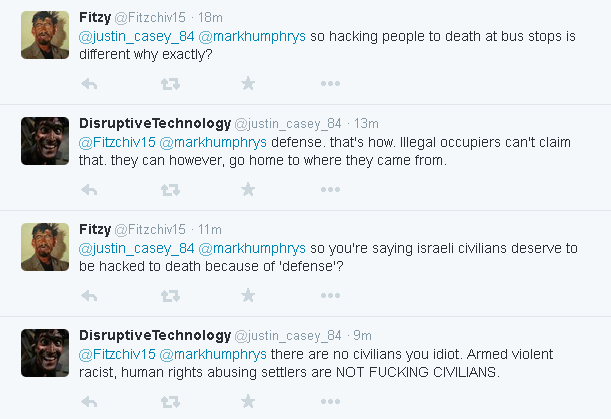 Kill all the Jews!
Some Irish guy called "justin_casey_84" says all Jews must be killed: "there are no civilians".
"Justin Casey" may be a pun.

Irish person Cathy Hutton tweeted her support for the Hamas Islamic terror group in public.
She then got angry when I quoted her!

It's amazing how often Twitter exchanges end up in the same dark place - with the opponent (often not a Muslim at all) declaring open support for the Islamic jihad against the Jews.
This is Cathy Hutton, 15 Nov 2014: "Hamas are freedom fighters".
And more: "people under occupation have right to resist ... It is not Islamic Terror Campaign ... Its a struggle for freedom & Justice". 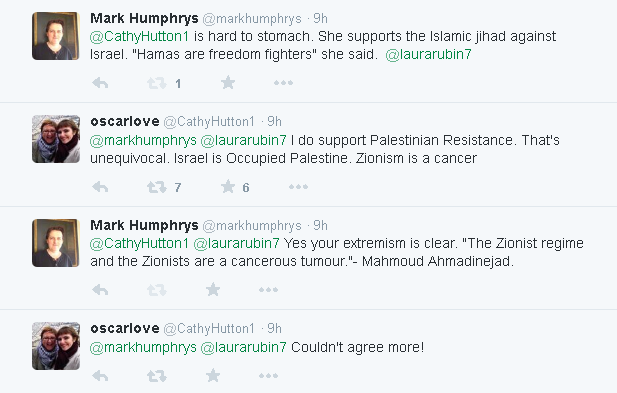 More support for Islamic terror from this person.

Ludicrous. Sue me for what?
Quoting you? I don't think so.
Describing Hamas as an Islamic terror group? Good luck with that. 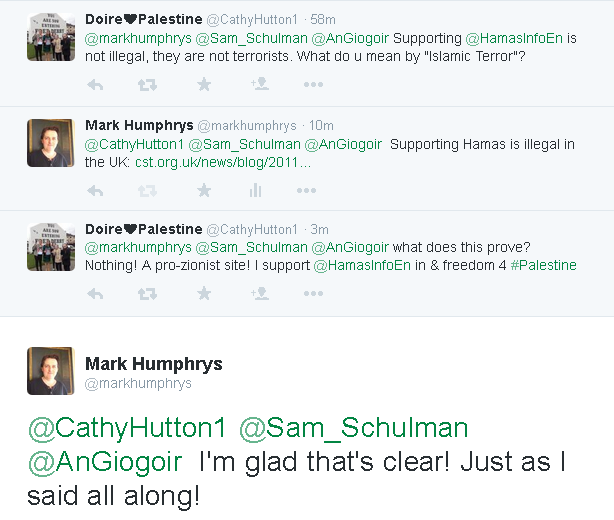 She then doubles down on her support for Hamas.
And Hezbollah as well!

Oddly for someone who wants to go to court, she then slanders me as a racist.

Cathy Hutton seems shocked that I would link Hamas to "Islamic terror". In fairness, she may know nothing about them. So for her benefit, here are a few videos to explain what Hamas is.
Hamas members explain what they stand for - Islamic terror.

Hamas suicide bomber farewell video.
"There is no god but Allah. ... We are a nation that drinks blood. We know that there is no better blood than the blood of Jews. We won't leave you alone until we have quenched our thirst with your blood, and our children's thirst with your blood. We will not rest until you leave the Muslim countries."
These guys are clearly not Islamic terrorists!

Hamas suicide bomber farewell video:
Jews are descendants of monkeys and pigs. He will get virgins in paradise as a reward for killing Jews.
Hmm, I wonder what sort of terrorist this guy is? 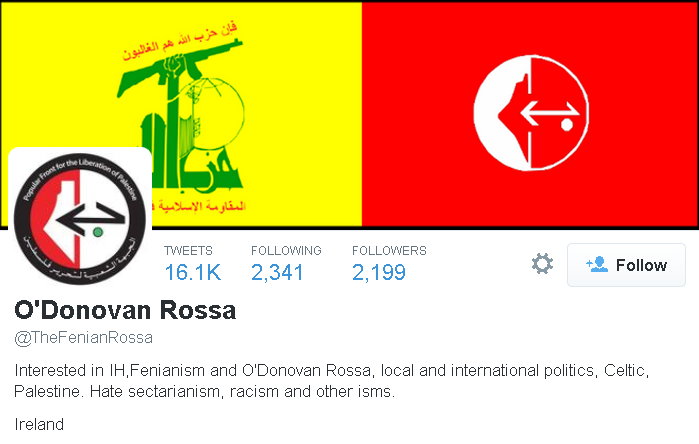 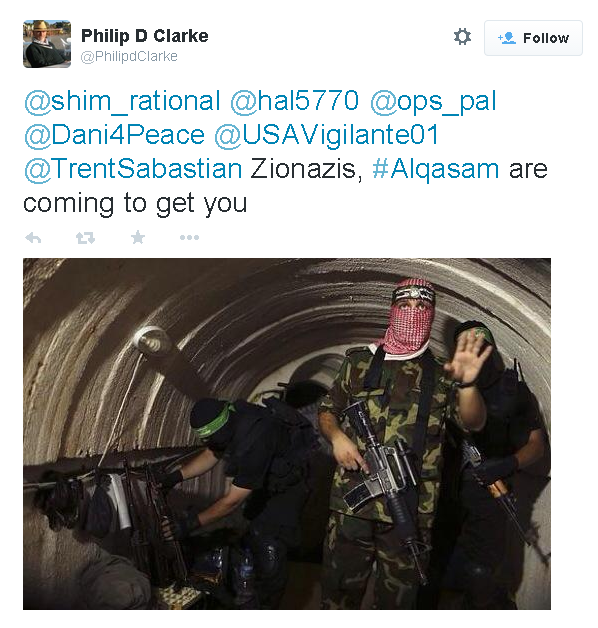 Sick comedy: Philip D. Clarke is "Anti fascist".
And tweets support for Hamas: "Zionazis, #Alqasam are coming to get you". 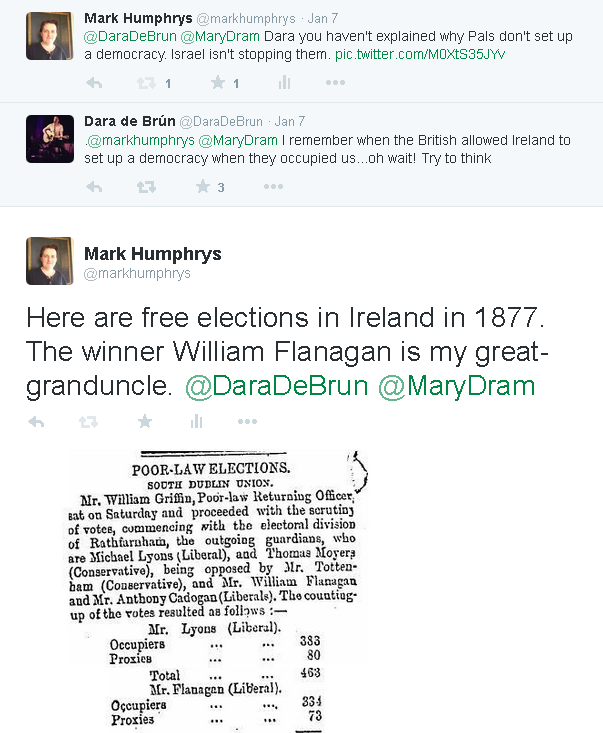 Another anti-Israel person who is a simplistic Irish nationalist.
If you see a Palestinian flag and an Irish flag, you know you're going to get a very simple view of both Israeli and Irish history.
"stscholasticas" delivers comic book history in this thread in May 2015.

She claims that every Catholic who improved their lot in the 19th century "worked with the British & against freedom".
Simplistic Maoist drivel. But dangerous too. This kind of illiterate, black and white, emotional history has inspired endless violence in Israel and Ireland, and will inspire more violence in the future. 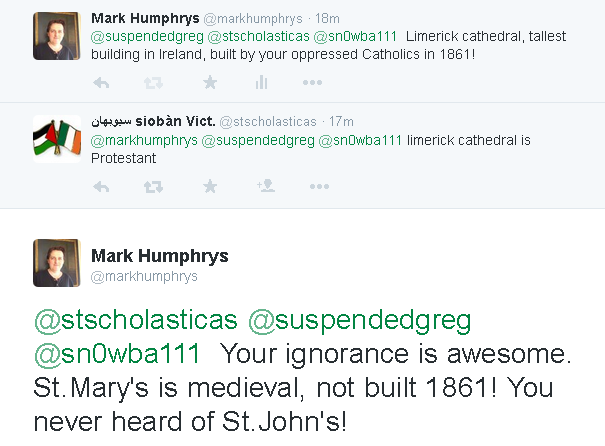 Like many simplistic Irish nationalists, her grasp of Irish history is rudimentary.
She seems to think Catholics were seriously "oppressed" in 1915.
Here some idiot talks about the Pro-Cathedral having to be down a side street. Um yeah, but that was decided in 1803. This was ancient history long before 1915. I point out that, long before 1915, the tallest building in Ireland was a Catholic cathedral.
And then "stscholasticas" reveals she has never heard of the Catholic cathedral in Limerick, built in 1861, the tallest building in Ireland.
It's a good rule of thumb that anti-Israel Irish people generally know little about Ireland as well as little about Israel.

"Anti-racists" who want to deport the Jews

The number of "liberals" who think the "solution" is an ethnic cleansing of the Jews of the West Bank is incredible. They see no contradiction between this and their self-image as "liberals". 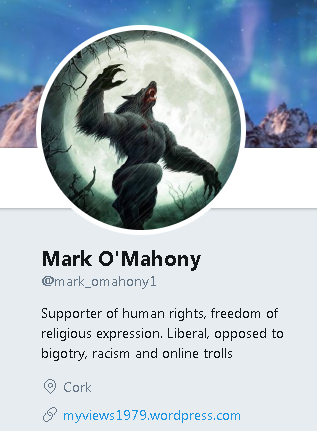 Mark O'Mahony is a supporter of "human rights", a "liberal", and opposed to "bigotry" and "racism".
That's nice. 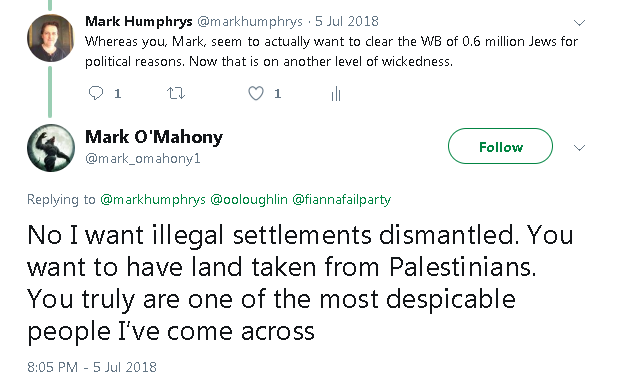 Mark O'Mahony (same guy) wants to "dismantle" the homes of all 0.6 million Jews living in the West Bank and East Jerusalem. He wants to destroy all their businesses, schools and synagogues. And deport them all into pre-1967 Israel. Because of ideas in his head. Because he is a "liberal". 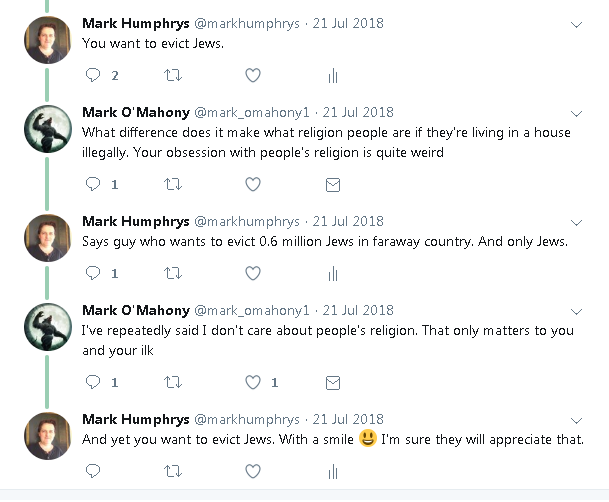 As he is evicting the Jews, he will assure them he has nothing against their religion. They will like that! 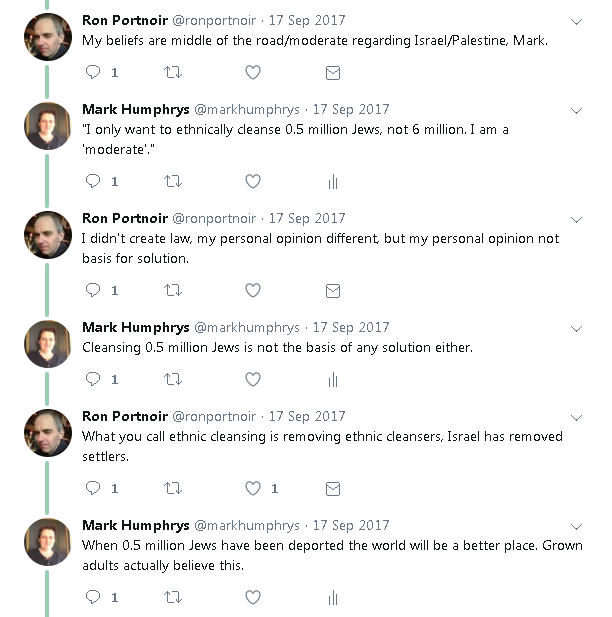 "Ron Portnoir" says his beliefs are "middle of the road/moderate".
And he wants to deport 0.6 million Jews. 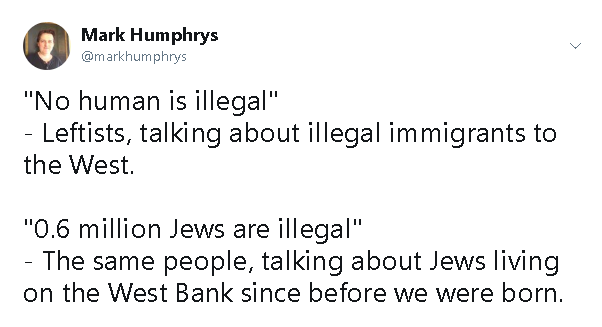 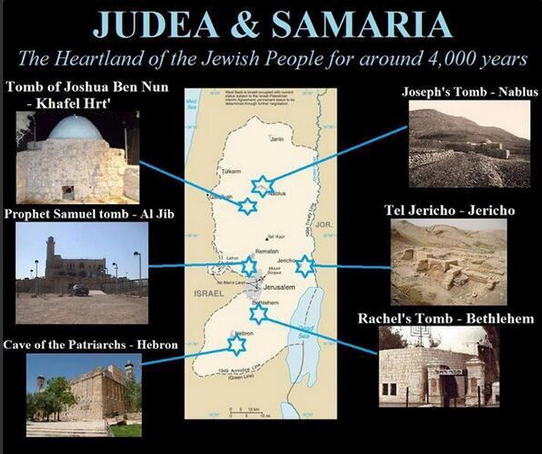 "Progressives" want to cleanse all Jews from this area. They believe this is moral, and will bring peace. 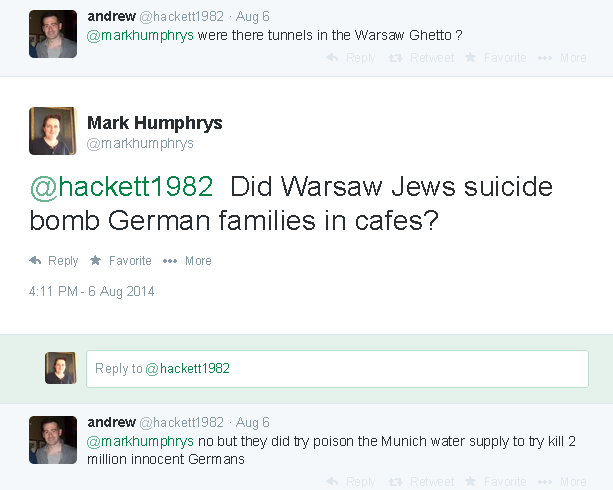 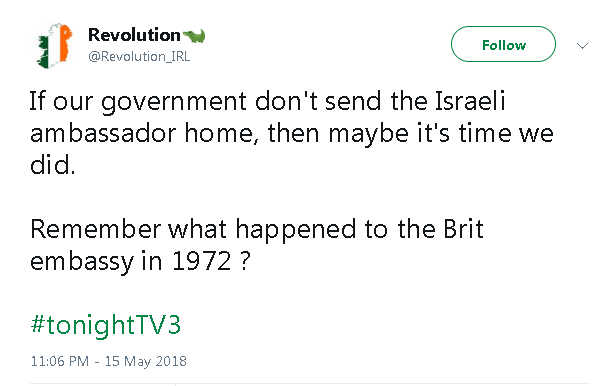 Irish account Revolution_IRL calls for a terrorist attack against the Israeli embassy in Dublin, 15 May 2018.

Return to The Irish left and Israel.