A celebrity idiot. A cult leader, leading a cult of fools who see what they want to see. A know-nothing who watches TV shows and does not read. A man of dodgy, untrustworthy politics, who is just as likely to praise a dictator as to oppose one. A "patriot" with a history of slandering America and defending its enemies. A "capitalist" who hates free trade.

A man-baby who says and tweets pathetic, infantile, childish things. A disgusting sexist sleazeball who one would cross the road to avoid. A man of hideous appearance and hideous manners.

Trump is all of these things. And yet Americans picked this fool as their President in 2016.

After the lost decade of Obama's appeasement, I thought there would be hope for what came next. But instead of picking a Reagan to take on the jihad, and other threats, Americans picked another celebrity idiot. 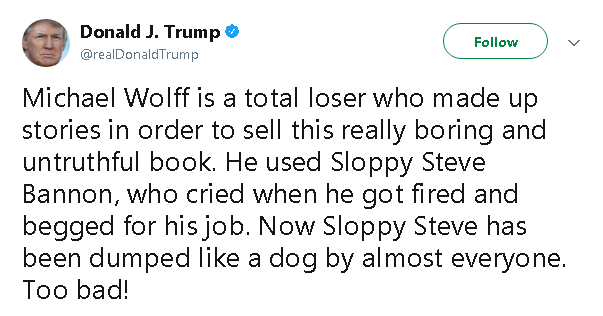 Among Trump's thousands of pathetic, babyish tweets, it is hard to highlight the most pathetic.
But this one caught my eye.
America has elected a 10 year old man-baby as President.

The US is now led by President Dwayne Camacho from the movie Idiocracy.

My main problem with Trump is that he is an ignoramus. He has no ideology, no core beliefs. He knew nothing about the issues until yesterday. I have followed the war against the jihad in enormous detail since 9/11. In all that time, I never heard Donald Trump say anything interesting about it. He knows nothing about it. His vague, ill-formed positions emerged yesterday and will be replaced by other positions tomorrow.

Anyone who believes he is a counter-jihadist will be sorely disappointed. Trump has no plan for the jihad. He has not got the character or learning to formulate a plan and see it through.

When he took office, Ronald Reagan had held the same ideology for decades. He understood communism perfectly. Trump, in contrast, knows little about the jihad, and will blow with the wind of the last person he talked to.


Fake "counter-jihadist" Trump thinks Muslim women like wearing the veil because it avoids makeup.
He knows nothing about Islam and forced veiling.
He talks in childish generalisations, like an uneducated bar drunk.

Trump responds in 2016 to the unearthing of a 1990 interview where he seemed to praise China's crushing of the pro-democracy protest in Tiananmen Square. In 1990 he said: "When the students poured into Tiananmen Square, the Chinese government almost blew it. Then they were vicious, they were horrible, but they put it down with strength. That shows you the power of strength. Our country is right now perceived as weak ... as being spit on by the rest of the world".
In 2016 above he makes things worse. He calls the heroic pro-democracy protest a "riot".
Unlike Reagan, Trump does not admire freedom. He admires thugs and strong men.

Incredible and horrifying: Trump is unable to condemn famous white racist David Duke and the KKK.

Trump's hatred of the free market

For a man who became rich through capitalism, Trump has a remarkable hatred of the free market. In particular, he has a hatred of the globalisation and free trade that has made the world so much richer.

Trump is obsessed with trade deficits, viewing them as a "problem" the same way Marxists view inequality as a "problem". He constantly threatens US government interference in free trade.

Republicans, the party of the "market", voted for this statist, protectionist, economic illiterate. 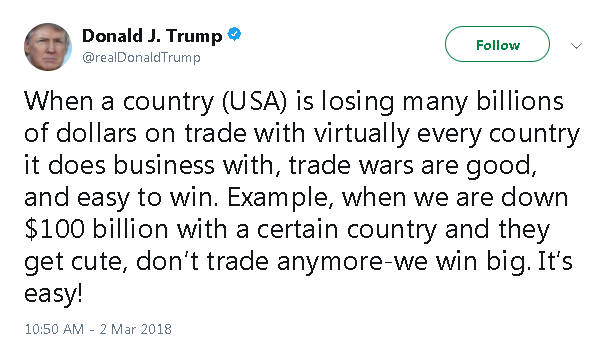 Breaking, March 2018: Celebrity TV idiot discovers how to make a country rich:
Simply refuse to trade with any country with which it has a trade deficit.
Why did the learned men never think of this! It's easy!

Trump pals around with terrorists

Like Obama, Trump pals around with terrorists.
Trump is a fraud: He is not anti-terrorist.
Here he pals around with Irish terrorist leader Gerry Adams at an IRA fundraiser in 1995.
Did Trump's donation help pay for the IRA truck bomb in London soon after?

I debate Trump's support for the IRA with a Trump fan here.
He says: "I am pretty certain that DJT is *not* funding terrorism - at least not recently. ;o) I'm more incline to believe he is anti."
My reply is above.

Trump is not pro-West

Trump is not "pro-West". He is not a "patriot". He has a history of dodgy positions more like a right-wing Noam Chomsky.


Trump's foreign policy is not based on any reading or philosophical foundations. A lot of it seems to be leftist drivel combined with Russia Today lies, with a layer of "Make America Great". He hasn't a clue what he is talking about.
Here in Oct 2015 he admires Putin's horrific intervention in Syria. Putin is helping with the indiscriminate slaughter of Syrians, but Trump cares nothing for the human cost. He wants Assad, who has killed 100,000 people, to stay in power. And he says it would be better if Saddam (who killed 2 million people) and Gaddafi were in power.
Trump defends Putin killing journalists: "Well I think our country does plenty of killing also".
An America-hating commie could not have said it better. 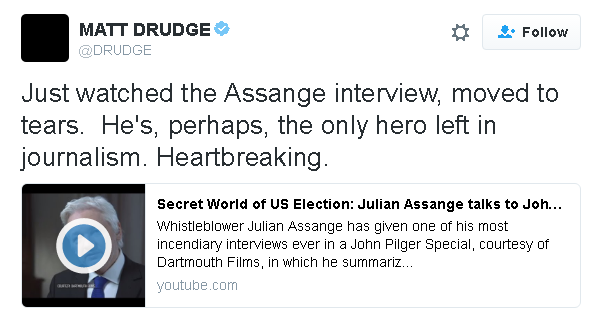 Trump, Jan 2019, defends the Soviet communist invasion of Afghanistan in 1979: "The reason Russia was in Afghanistan was because terrorists were going into Russia. They were right to be there."
What terrorists? What is he on about?
Bill Kristol: "The party of Reagan has become the party of Brezhnev."

Trump has a high opinion of Trump

Most normal people, as they grow up, realise how little they know and how many other millions of intelligent thinkers have come before them and are currently alive. Not this buffoon.
24 Things Nobody Does Better Than Trump (According To Trump).

Everything Donald Trump Is an Expert In, According to Him. 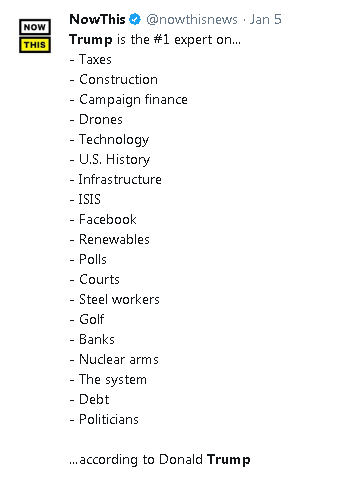 Summary of Trump's genius, according to Trump.
The man-baby Trump says he is a world expert in all of these topics.
From here.

Even if Trump had good ideas (which he does not) there would still be the problem of his low character.

He is a rude, boorish, vulgar, classless, sexist, offensive, petty, childish bully who drags the level of political discourse into the gutter. He is hyper-sensitive to criticism and has no self-control in his attacks on critics and opponents. He is a sleazy man of low moral character, unfit for leadership. I am mystified how any decent conservative could vote for him. I thought conservatives stood for decency, manners and civility.


"The Best Words". Ad from American Future Fund about Trump's foul language. "Offensive. Out of Control. America Can do Better."

A Trumpist says that Trump is "a gift from God to our beloved nation."
God apparently is some kind of sexual pervert. (To be fair, the Old Testament tried to warn us of that.)
From here.

I'm no fan of Hillary Clinton. From 2009 to 2013 she was the useless Secretary of State in the useless Obama administration.

Appeasement of Iran. Support for the Muslim Brotherhood. The abandonment of Iraq to the jihad. Syria and Russia running rampant. The emergence of the Islamic State. Genocide in Iraq and Syria. Freedom in the world going backwards.

Anyway, once Trump finally won the Republican race, Clinton rolled out the brutal attack ads that the Republicans never dared to. They are devastating. The ads about Trump write themselves.

Other attack ads against Trump

Ads against this sleazy lowlife just write themselves.

Trumpists who block me

Trump has created a massive rift on the right. So much so that I am now blocked on Twitter not just by pro-jihad leftists (see my site's footer) but also by anti-jihad people who have joined the cult of Trump.

Trumpists who block me for criticising Trump:

The Trump era is the era of the fake counter-jihadist. The "counter-jihadists" who get angry if America takes action against tyranny abroad. Who blame America for 9/11, who say American troops commit war crimes, who piss on the American mission in Iraq, bash Israel, defend Syria and defend Russia.

Trump is the ultimate fake counter-jihadist. And a bunch of other fakes, like Paul Joseph Watson, have joined him. 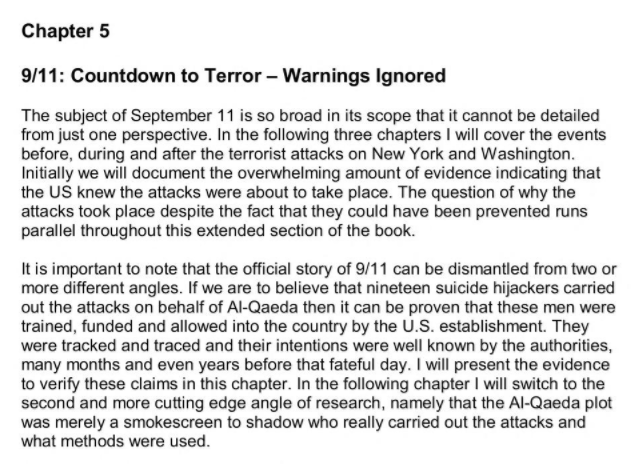 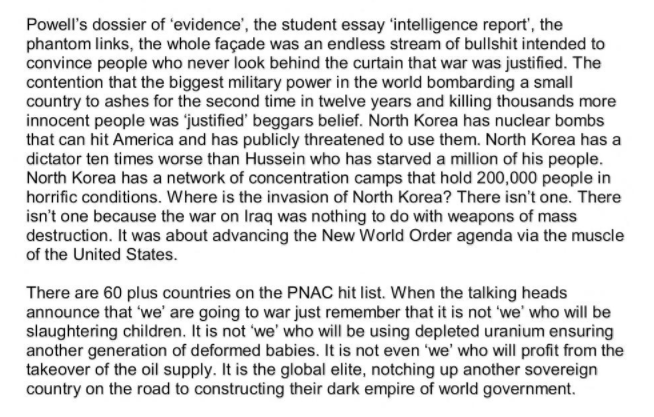 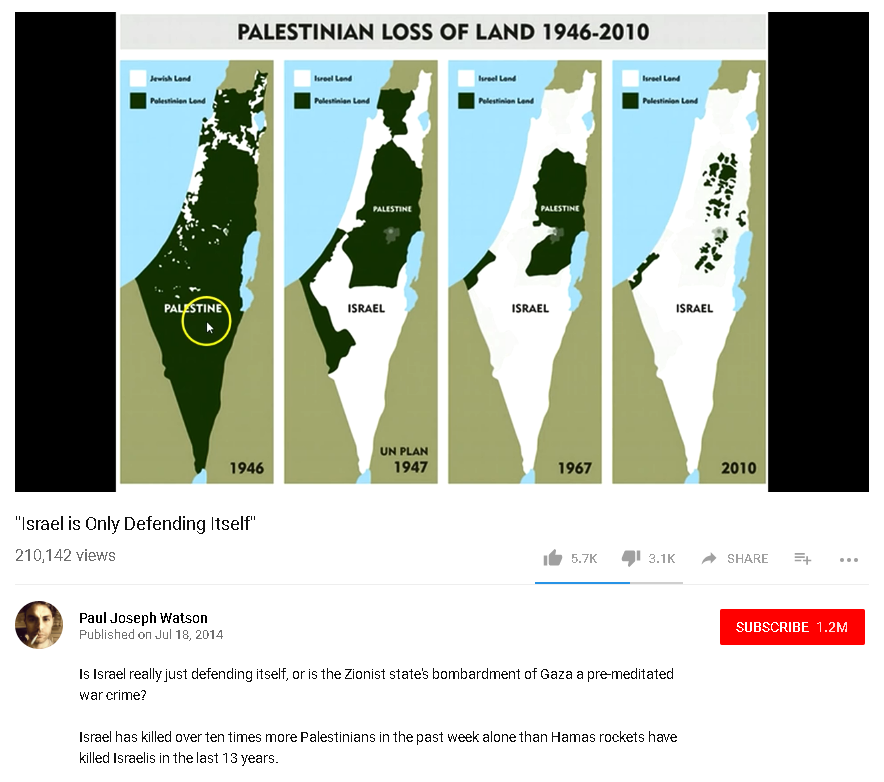 A "counter-jihadist" who attacks Israel ("the Zionist state") using jihadist-leftist propaganda.
Still from the video above.
The man is a total fraud.

So I have told you why I hate him.

But I need to list the good things President Trump does. He is a shallow thinker, an unreliable ally, and a horrible man. But he may do some good things, or appoint people who do good things.

He will always be a buffoon. But let us list what his administration gets right.

Can I forgive Trump his multitudinous sins because of the above?

Maybe, if he keeps it up.

It could be worse, I suppose.