I never heard of the celebrity American rapper Talib Kweli before he started tweeting lies about me to his 1 million followers in Sept 2016.

Complaining about the lies led to a stream of new lies. This guy is truly one of the craziest people I have ever come across on Twitter. It is hard to believe this person is real. 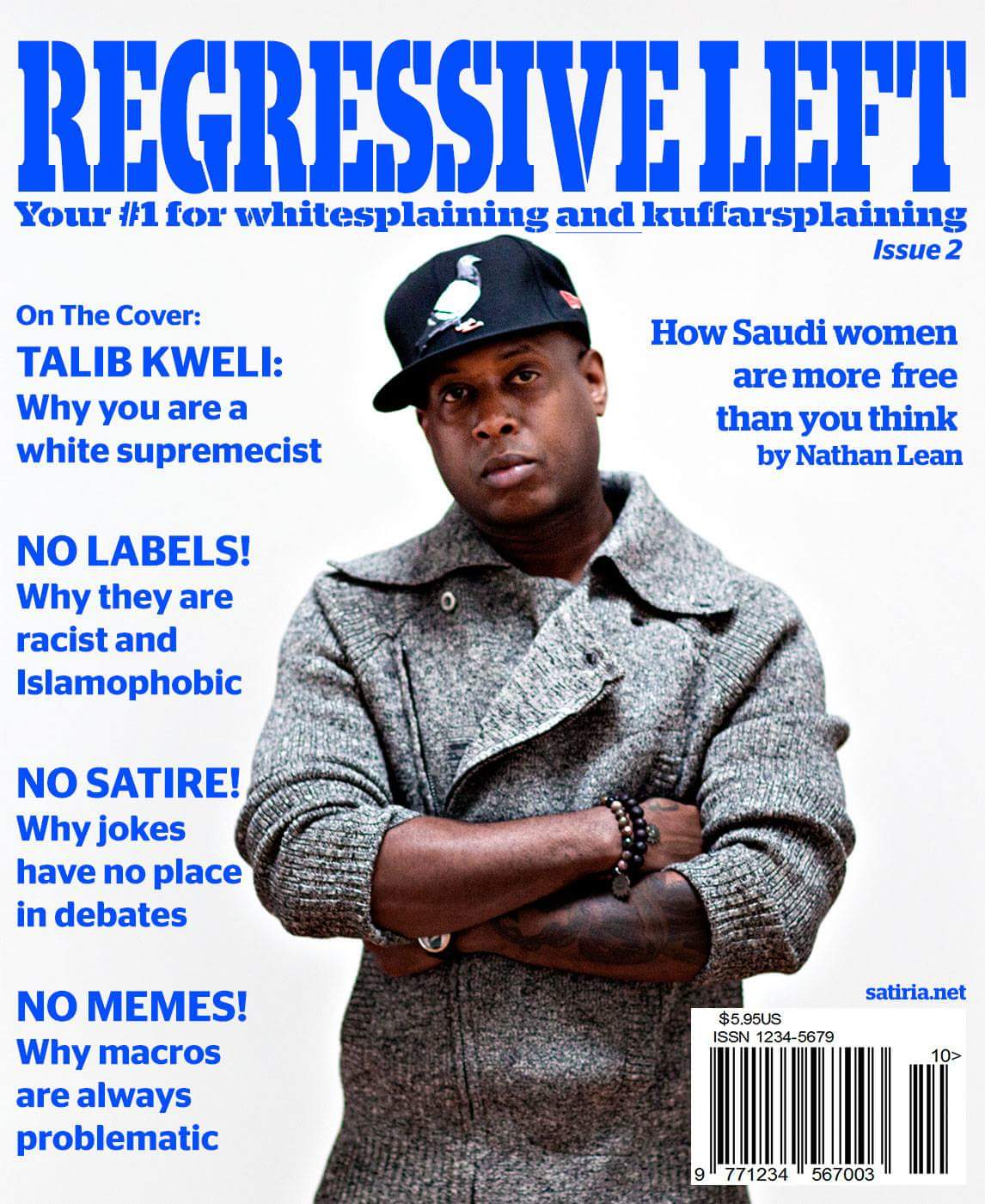 Other people have spotted how this guy operates.

Celebrity rapper posts lies about me 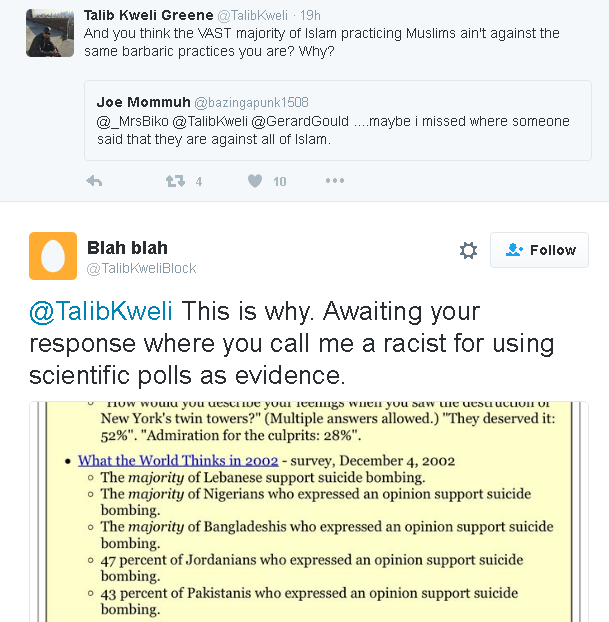 My adventure with this loony started here on 5 Sept 2016, when someone sent him a screenshot of my page: Opinion Polls in the Islamic world.
He did not respond well. 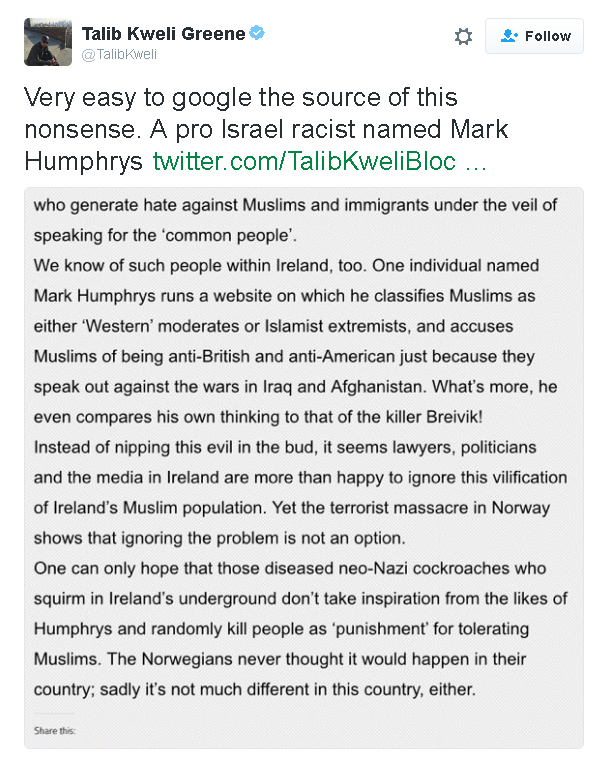 Kweli does not deal with the issue of the opinion polls.
Instead, some idiot Googling leads him to the sad lies of Qasim Afridi about me.
Afridi claims I support the Norwegian killer Breivik. Of course, in reality I think Breivik is a terrorist who should get the death penalty.
Kweli reposts Afridi's lies and calls me a "racist". 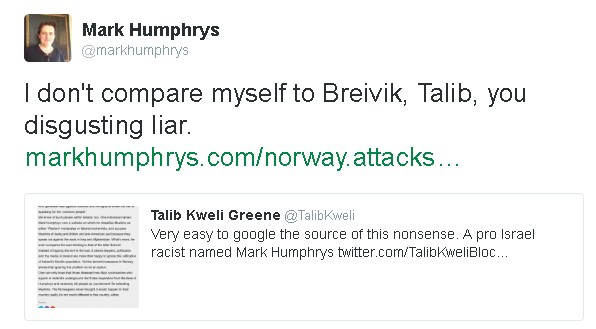 I found the above, replied, and then things got really crazy.

Rapper calls me a racist

In response to the above, Kweli issued a flood of crazy insults and libels against me. Endless abuse instead of logical argument.

All he says is basically: "You're a racist!" It's his only argument. 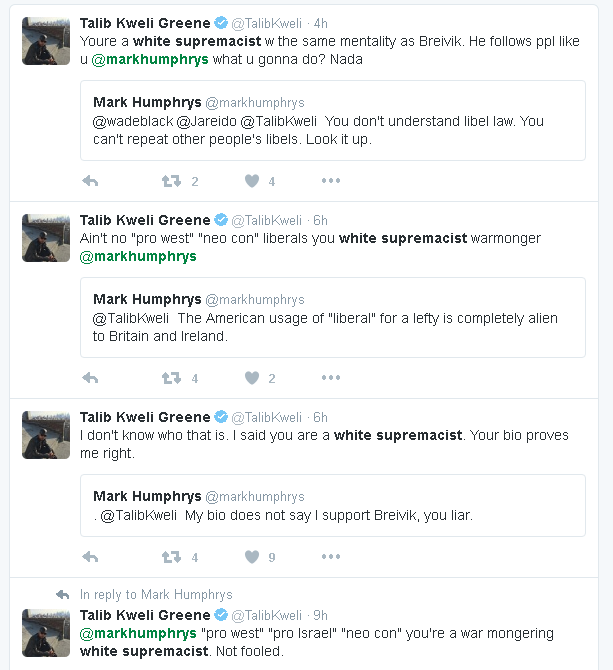 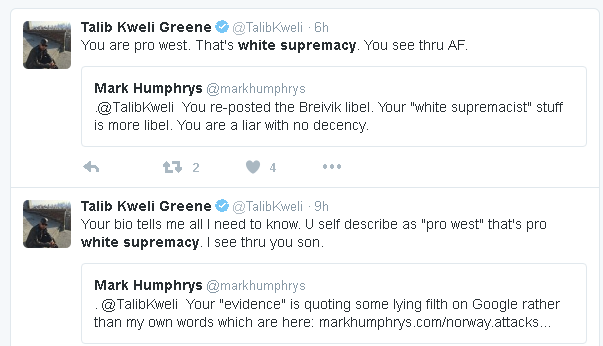 More or less every crazy tweet calls me a "white supremacist".
So we can capture them all in a single search.

The rapper managed to read my one-line bio, which seems to be the longest thing he's read this year.

And he made a fool out of himself when he came across my self-description as a "classic liberal". It turns out he never heard of the term.

Celebrity makes fool of himself because he is too lazy to Google "classic liberal".
He carries on tweeting about this, unaware of his ignorance.

If the ignorant fellow actually looked at the Wikipedia entry for "classic liberal", he might learn something.

Rapper says that regarding democracies as superior to non-democracies is racist.

The dumbest man on the Internet

In other threads, Kweli reveals his incredible, jaw-droppingly stupid ideas.

He actually says that it is bigoted to criticise Islam more than Christianity.
Independent of what the religions are doing!
Based purely on skin colour!
(Or at least skin colour as perceived by an ignoramus. The reality may be different.) 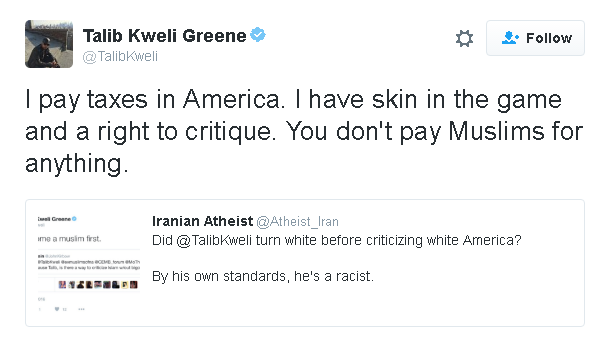 American rap artist actually tells an Iranian atheist that he has no right to criticise Islam. 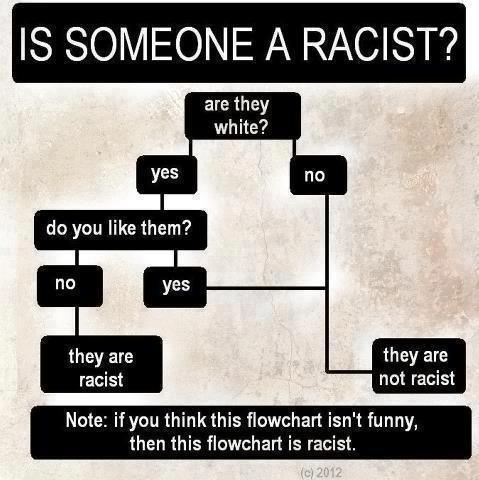 The hilarious Gavin McInnes got the same Talib Kweli treatment in 2017, and amusingly replies above.
Again and again, Kweli calls him a "Nazi". Again and again, Kweli presents no evidence. Deranged screenshots of things Kweli misunderstood. Endless strawmen and replies to statements that were not made. And the same conclusion to everything: "You are a Nazi".
McInnes takes it all apart with good humour. 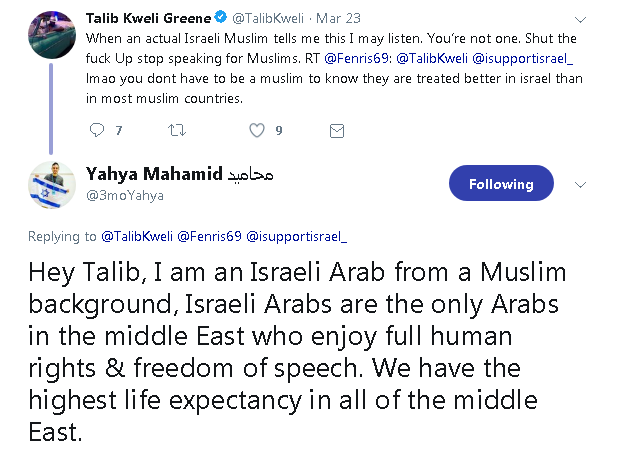